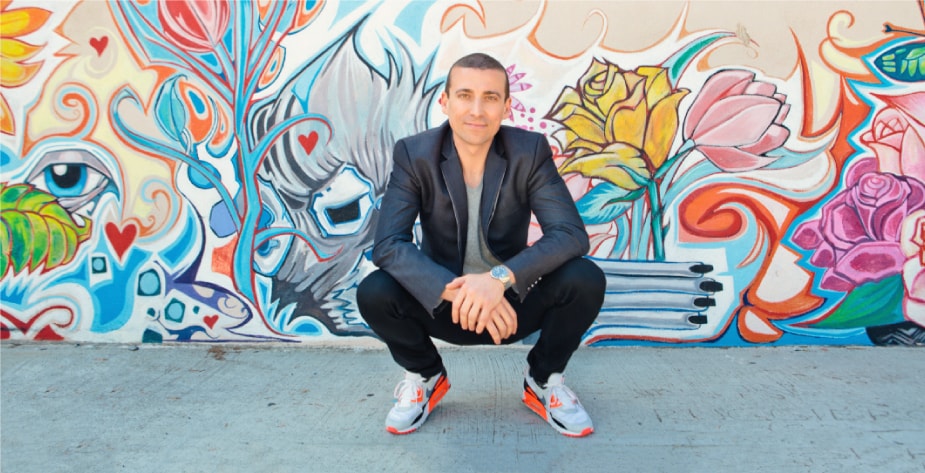 Did you ever want to have an impact on the world around you but didn’t know how? This is how keynote speaker Cameron Brown felt the day he heard screams coming from the house next door. When he ran over, he found a distraught mother who had just discovered her son had committed suicide. Feeling helpless, this incident propelled Cameron to have a more positive impact on the world.

He started a coaching business, learned more about personal and professional excellence, gave up alcohol and energy drinks, and moved to a plant-based diet. He used his piano skills to record music to reach people and have a more positive impact. Then he traveled the world. Upon his return, he created what later became known as the Thriving Collective, an organization where he could use his expertise in film, music, and speech to reach out, form relationships, and make positive change.

But he wanted to have more than just a local impact. So he sold (and donated) up to 99 percent of his possessions and began the Impact Diaries to show how people can use their own strengths to have a positive impact in three areas: their own lives, other people’s lives, and the world.

His positive message has taken him all over and attracted the attention of National Geographic who has designated him as a National Geographic Explorer. Currently, he is living in Denver, recovering from “There is Still Time” Media Tour in America, catching up with sleep, and planning new projects. If you want to get involved and be part of the positive impact, you can be inspired by his talks, films, and music, or donate to one of his projects.

In his signature Impact Loop keynote, Cameron reaches out to individuals, organizations, and businesses to show them how they can have an impact by innovating, building relationships, being unstoppable, and maximizing their individual abilities. His talks provide a multisensory experience with music, video, and live performance.

Cameron uses high-quality video (some shot by drones) to show projects where people are making a positive impact on the world. On his YouTube channel, you can see mini-documentaries on sea turtle conservation in the Osa Peninsula in Costa Rica, and sustainable travel at the Yacutinga Lodge, which is located deep in the pristine part of the Misiones jungle in Northern Argentina.

Cameron performs music live on grand piano for keynote talks. He also records songs on positive themes and creates videos for them that have reached millions of listeners.

His organization, the Thriving Collective, is always working on projects for positive impact. The most recent project has focused on reforestation, planting trees on behalf of donors in Northern Colombia where the forest had been stripped away for agriculture purposes. In the One Tree Planted project, every dollar raised contributes to one tree planted. His group works with communities to plant the proper species during the rainy season for the best success.

While the details of his next Impact project are hush-hush, Cameron dreams to combine all his skills for a daring project that will have a positive impact on an even larger scale.