Leadership in a Troubled World

Anders Fogh Rasmussen has been at the center of European and global politics for three decades as a leading Danish parliamentarian, Minister for Taxation (1987-92), Minister for Economic Affairs (1990-92), Prime Minister of Denmark (2001-09) and Secretary General of NATO (2009-14).

His tenure as Secretary General of NATO marked a fundamental transformation of the Alliance.
He developed a new Strategic Concept, which sets the Alliance’s core priorities for the future. In the midst of the most serious economic crisis in recent time, he launched “Smart Defence” to help nations make more efficient use of their resources through more multinational cooperation. A reformer who made the Alliance leaner and more efficient, Mr. Rasmussen also extended and strengthened NATO’s partnerships with nations around the world, making it the hub of a network of international security partnerships.

In his latest book, The Will To Lead: America’s Indispensable Role in the Global Fight for Freedom, Rasmussen argues that western democracies with the steadfast leadership of the United States must stand up to authoritarianism around the world. 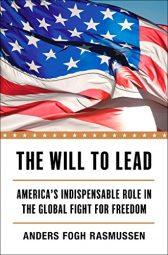