Vivekananda: The Birth of the New Age; the First Missionary of the East to the West

Crime Reporting: from Manson to JonBenet to Ronnie Chasen

Ann Louise Bardach has written for virtually all the major media in the U.S. and the U.K. – the New York Times, the Washington Post, Politico, the Wall Street Journal’s Magazine, the Los Angeles Times, The New Yorker, The Atlantic, Slate, The Guardian, Financial Times, The New Republic, Newsweek/The Daily Beast as Writer-at-Large and Vanity Fair, where she was a reporter for a decade. She has been called “the go-to journalist on all things Cuban and Miami” by the Columbia Journalism Review.

A prize-winning author and reporter, she has covered an eclectic range of political and cultural issues – from crime reporting to elections to matters of faith and belief to the nature of celebrity.

She is the author of Without Fidel: A Death Foretold in Miami, Havana and Washington and Cuba Confidential: Love and Vengeance in Miami and Havana, as well as the co-editor of The Prison Letters of Fidel Castro and editor of Cuba: A Travelers Literary Companion and served on The Brookings Institution’s Cuba Study Project.  Her book Cuba Confidential was a finalist for the New York Public Library Helen Bernstein Award for Excellence in Journalism and the PEN USA Award for Best Nonfiction, and named one of Ten Best Books of 2002 by the Los Angeles Times.  In 1995, she won the PEN USA Award for Best Journalism for her reporting on Mexico in Vanity Fair magazine; the year previous, her Vanity Fair coverage of the impact of Islamic fundamentalism in the West was a finalist for the PEN USA Journalism Award.

An intrepid reporter known for securing hard-to-get admissions from Fidel Castro to E. Howard Hunt, she has interviewed several dozen U.S. and world leaders and personalities. She is frequently seen and heard on television and radio and has appeared on 60 Minutes, the Today Show, Good Morning America, Dateline, CNN, Nightline, The O’Reilly Factor, Charlie Rose, National Public Radio and PRI’s Marketplace. She created and wrote the Global Buzz column for Newsweek International and the Interrogation column for Slate.

She started the Global Journalism class at University of California at Santa Barbara and is on the board UCSB’s Carsey-Wolf Center for Film, Television and New Media and was also a Resident Scholar with the Orfalea Center at UCSB. Several of her articles have been anthologized in KILLED: Journalism Too Hot To Print and Mexico in Mind (Vintage). 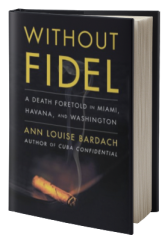