Women's Health in the 21st Century

Talking with Children about Sexuality

Beyond the G Spot: Recent Research on Female Sexuality

Beverly Whipple is also the co‑author of the international bestseller, The G Spot and Other Discoveries About Human Sexuality, which has been translated into 19 languages and was re-published as a classic 23 years later. Her other co-authored books are: Safe Encounters: How Women Can Say Yes to Pleasure and No to Unsafe Sex; Smart Women, Strong Bones; Outwitting Osteoporosis; The Science of Orgasm; and The Orgasm Answer Guide.

Dr. Whipple has appeared on over 250 radio and TV programs and has been featured in many magazines, with her works cited in publications as varied as Modern Maturity and Playboy. Beverly Whipple serves as a consultant on sexuality issues to the World Health Organization and other agencies, and has delivered over 700 talks and keynote speeches, published over 170 research articles and book chapters. In 1982 and 1983 The Philadelphia Magazine named her one of their “People to Watch.” She is also a Fellow of the Society for the Scientific Study of Sexuality and a Fellow in the American Academy of Nursing. For their 50th anniversary, the New Scientist named her one of the “50 Most Influential Scientists in the World.”

Dr. Beverly Whipple is a Professor Emerita at Rutgers University. She has a BS in Nursing from Wagner College, a Masters in Counseling, a Masters in Nursing, and a PhD in Psychobiology, with a major in Neurophysiology, from Rutgers University. Her concern with women’s health derives naturally from her over forty years of helping women to feel better about themselves, as a nurse, a nurse educator, and researcher.  Her research focuses mainly on women’s health issues and the sexual physiology of women.

More About Speaker, Dr. Beverly Whipple . . .
Beverly Whipple is the recipient of many awards, including the Hugo Beigel Research Award for research excellence and the best article published in the Journal of Sex Research, the NJ State Nurses’ Association Award for Excellence in Research, the Distinguished Scientific Achievement Award, the Public Service Award, the Kinsey Award and the Bullough Award for the most distinguished book written in 2006 from the Society for the Scientific Study of Sexuality (SSSS), and the Professional Standard of Excellence Award and the Distinguished Service Award from the American Association of Sexuality Educators, Counselors and Therapists (AASECT). She has received the Brisben Foundation award for Excellence in Women’s Health, the NJ League for Nursing Diva Award and the Gold Medal from the World Association for Sexual Health (WAS) for outstanding lifetime achievements.

Dr. Whipple is a member of a number of Honor Societies and received the Alumni Achievement Award in 1983 and was named An Alumni Fellow in 2007 by Wagner College. Dr. Whipple was the President of AASECT (1998-2000), was the Vice President of the World Association for Sexology (2001-2005), the Secretary General/Treasurer of the World Association for Sexual Health (2005-2009), was on the Board of the International Society for the Study of Women’s Sexual Health (2002-2004), and was the President of SSSS (2002-2003). She is an Honorary Member of the Board of the Foundation for the Scientific Study of Sexuality (FSSS).

Dr. Whipple lives in New Jersey with her husband.

“Beverly Whipple is the adults’ answer to ‘everything you wanted to know about sex, but were afraid to ask.’ She’s credible, frank, authoritative, and comes across as your big sister might – caring, feeling, honest.” 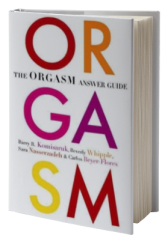