An Irreverent Evening with Bill Maher

Bill Maher is one of the today’s most politically astute comedians in the U.S. His unflinching honesty and commitment to never pulling a punch have garnered him the respect and admiration of millions of fans.

In 2003, Maher launched Real Time with Bill Maher on HBO, a network that’s a perfect fit for his irreverent style. Real Time with Bill Maher has received multiple Emmy nominations as well as nominations from the Writers’ Guild of America and Producers’ Guild of America. Some of the outstanding guests who have appeared on the show include Drew Barrymore, Dan Rather, John Legend, Bradley Whitford, Rev. Jesse Jackson, Gen. Wesley Clark, George Clooney, Howard Dean, Michael Moore, Robin Williams, Susan Sarandon, Kevin Costner, Gary Hart, Pat Buchanan, Ben Affleck, John Edwards and George Carlin. Each week, Bill’s hilarious opening incisive interviews, monologue, and stimulating panel discussion, as well as his extremely popular “New Rules” segment, serve to wrap up the week’s most important events in a way that makes you think, as well as laugh.

The “New Rules” segment proved so popular, that Bill adapted it into a book, New Rules: Polite Musings from a Timid Observer. The book spent nearly three months on The New York Timesbestseller list. Some of the best “New Rules” have been put together and are currently available on DVD. The audio book of New Rules received a Grammy Award nomination for Best Spoken Word Album.

Maher’s credits include numerous HBO specials, including the critically acclaimed Bill Maher: Be More Cynical and most recently, the Emmy nominated I’m Swiss. Maher’s newest HBO special, Bill Maher: The Decider aired in 07. He received a Tony nomination for the three-week run of his one-man Broadway show “Victory Begins at Home.”

Currently, Maher is engaged in production of a documentary that examines religion with critically acclaimed director Larry Charles (Borat). The still untitled project has already garnered much buzz at this year’s Cannes Film Festival. This documentary will take a deep look at the presence of religion in some of the major news stories in recent years, and religion’s effect on society as a whole.

Bill recently hosted Amazon Fishbowl with Bill Maher, a 30-minute program that was shown on the Amazon.com homepage featuring live performances by renowned musicians and thought-provoking interviews with authors, directors and actors.

In 1993, he launched Politically Incorrect where he brought together some of the most interesting entertainers, politicians, and journalists to participate in some of the most controversial, topical and comical discussions. Winners of four CableACE Awards, Bill Maher and his program grew in popularity year to year, eventually capturing the post-Nightline time slot. This show survived for five years on ABC and concluded its run in 2002. This show received a total of 18 Emmy nominations during its run. Maher, inspired by the show’s success, assembled some of Politically Incorrect’s most memorable highlights in his book Does Anybody Have a Problem with That? Politically Incorrect’s Greatest Hits.

His book, When you ride ALONE you ride with bin Laden is a useful and hilarious guide for the many Americans who want to help the war effort, but are at a loss as to how. This book is combination of 33 new posters, as well as several classics from our government’s archives, and text by Maher. It helps Americans make the connections between what we do and how it can help our troops and ourselves. In conjunction with the book’s release, Bill went on a nationwide stand-up tour and drew standing ovations for his hilarious routine which utilized the posters from the book to illustrate his commentary. 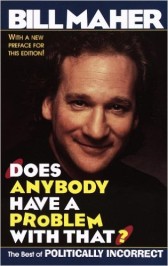 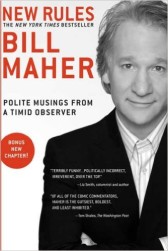