Discovering the Leader Within You

Cream of the Crop

Standing on The Shoulders

Keynote for for profit and non profit which uses story form to spotlight those whose careers flowed through mentors and are now mentors themselves.

Keynote traces in story form the key qualities which enable organizations to face rather than fear swirling change.

Bob Danzig’s Key Accomplishments Include . . . Bob Danzig is a highly successful corporate executive, author and one of the nation’s most spellbinding motivational speakers.

Bob Danzig grew from a childhood spent in five foster homes to two decades as nationwide head of The Hearst Newspaper Group and vice president of The Hearst Corporation. After graduating from high school with no family support, he took a job as an office boy at his local newspaper, the Albany (N.Y)Times Union. Nineteen years later, Bob Danzig became publisher of the Times Union before heading to the helm of The Hearst Newspaper Group.
Now an author and motivational speaker, Bob Danzig is also a member of the teaching faculty at the prestigious New School University and the guiding hand of The Hearst Management Institute. His goal is to be an instrument for renewed affirmation that every single person is worthwhile.

As anindustry leader, Bob Danzig has served the Newspaper Association of America, Newspaper Advertising Bureau, New Directions for News and the American Press Institute, and has earned industry-wide respect for his innovative marketing leadership. Bob Danzig was also awarded one of 12 professional journalism fellowships at Stanford University, the only business executive ever to be accepted into this program. He now serves on its board.

Bob Danzig’s business career has spanned 46 years with The Hearst Corporation from office boy to the ranking senior executive of one of the country’s leading newspaper companies, with 6,000 employees across the nation. Bob Danzig has also had leadership roles in the Newspaper Association of America, Newspaper Advertising Bureau, New Directions for News and the American Press Institute. He is the author of Vitamins for the Spirit, The Leader Within You, Angel Threads, Every Child Deserves a Champion, Conversations with Bobby and There Is Only One You.

More About Bob Danzig . . .
Bob Danzig got his first job as an office boy at the local newspaper over 40 years ago. That job turned into a career. Eventually, he became publisher of the Albany Times Union and Knickerbocker News, and became general manager of the Hearst Newspapers nationwide. Since then, the Hearst Group has had a renaissance of talent, technology and reputation. Annual sales have soared to exceed $1 billion, and cash flow has grown a hundredfold during Bob Danzig’s tenure. On a typical day, about three million people will read one of Hearst’s daily newspapers in cities across the nation. Bob Danzig also served as corporate vice president and member of the board of directors.

Bob Danzig graduated with high honors from Siena College in Albany and later received its award for outstanding career achievement. In May 1997, Siena College conferred on him, an honorary Ph.D. A civic leader, Bob Danzig has served on boards of directors of Albany Medical College, Siena College, Russell Sage College, St. Peter’s Hospital, Sunnyview Hospital, Albany Institute of History and Art, and Caldwell College, and on the executive committee of the Saratoga Performing Arts Center. In addition to graduating magna cum laude from Siena College, he received the college’s Outstanding Alumni Award, as well as an honorary Ph.D. Bob was also recognized as a Knight of Malta.

Not bad for a young man who grew up in five foster homes and got a college degree attending classes at night and on weekends. Bob Danzig was inspired to succeed, he says, by the people he met along the way. His great joy is being able to lift the spirit of others by sharing his experiences, and he does that very well. Despite a demanding business schedule, Bob Danzig has built a second career as a motivational speaker. He talks to thousands of people all over North America each year.

Bob Danzig shows you the difference between management and leadership. His finely crafted and convincingly delivered talks will inspire and motivate.

“Bob Danzig’s stories and passion inspired those of us in the room to continue to lead with our hearts even when they are heavy with concerns about funding, management and the ability to reach those we need to reach …not to mention the overwhelming reality that there is so much more that should be done. His opening remarks were uplifting and it was refreshing to step out of the forest …smell the raindrops on each tree branch and delight in knowing that we each do make a difference …one touch at a time!”

“Bob Danzig is one of those magic people who, when he enters a room, he fills it. And when he begins to speak, he owns it.” 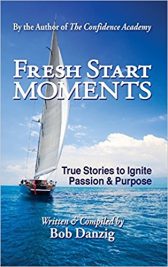 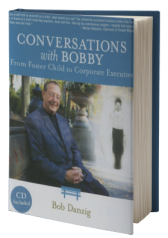