Cameron (Cam) Colvin Born and raised in Pittsburg California to mother Veronica Colvin and father John Colvin, Cameron was a prep super star at power house De La Salle High school in Concord, CA. winning a variety of awards and honors throughout the country. Cameron went on to attend the University of Oregon where he started as a freshman and sophomore, but nagging hamstring injuries kept him out of the starting line up until his senior year. In 2007 Cameron exploded onto the scene along with the high-octane Oregon offense, where he posted career high receiving numbers and led the Pac10 for weeks.

As fast as Cameron could fly past the secondary, it all came crumbling down during a game on October 13th 2007. Cameron felt and heard the gruesome crack in his right ankle and immediately knew his college career had ended. He didn’t need to see Oregon head coach Mike Bellotti wincing or hear the gasp from the Autzen Stadium crowd. Cameron knows pain all too well.

He lost both parents before he was old enough to drive. Cam’s father, John, died of acute morphine intoxication when Colvin was 6. His mother, Veronica, died of a stroke when he was 15. And his best friend, and De La Salle team mate, Terrance Kelly, was murdered two days before they were both to report to Oregon for football practice and enter college.

Cameron and misfortune need no introduction. He choked back tears as a team doctor inspected his broken ankle on the Ducks’ sideline, watching as his team went on to defeat Washington State 53-7. He peered into the stands once more, to find his family, before a cart rolled him into the empty Oregon locker room. And when his teammates returned following the game, they hovered around him without saying a word. His relatives wept nearby as Colvin sat quietly at his stall.

As Cam said at the time, “I’ve already lived through the hardest part of my life. I’ve sat in the front row for the funerals of both my parents, so a broken ankle isn’t anything. I’d take that any day over what I’ve been through.”

Throughout all of his trials, Cameron has continued to put his axe to the grind, allowing critics to marvel at his character, work ethic, and charisma. He was signed as a free agent to the a San Francisco 49ers where he earned high praise from offensive guru Mike Martz, who had led the St. Louis Rams to numerous Super Bowls. “He’s physical. He uses his speed and he goes after the ball. I’m very pleased with him. He doesn’t make many mistakes. He’s come out of the blue. We weren’t really counting on him to be a factor, but all of a sudden, he’s looking pretty good.” At 30, Colvin has just begun reaching his full potential, both in life and on the turf.

In 2009 he became the CEO of his own Corporation CamColvin Inc. Now CamCo Commercial. Developing an umbrella of businesses and partnerships valued from 35M to 1 Billion plus to date. .. In 2013 he led and directed raising capital for a luxury boutique hotel chain, as well as commercial real estate developments of his own.

Cam is also founder and CEO of Rise Above Development LLC, a premier business development and marketing enterprise. Rise Above aggressively assists client to break through any barriers to bring their product or service contributions to customers globally. He is surrounded by a seasoned staff and Board of Advisory with the background, contacts and expertise to make business a success. With International business ties, Rise Above’s focus is on real estate, oil, mining, tech, financial and startups. 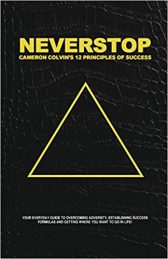