Chic saw the two worlds of psychology and music converge while working as a psychodramatist at the Community Hospital of the Monterey Peninsula in Carmel, CA. Time and time again the doctors, patients, families and staff would say “The best therapy we ever get around here is when Chic brings his guitar to work.” So, Chic began developing educational materials designed to strengthen communication skills based on a performer’s perspective. Chic’s one-on-one or group coaching considers the performance and delivery aspects of speaking in public. Chic is a master at guiding and encouraging others to express themselves with charm, confidence and humor.

If you are seeking to improve staff teamwork, decision making, self-confidence, retention and creative problem solving, this workshop is a great place to start. It brings a creative environment to the business community where employees are invited to show their artistic side ...

If you are seeking to improve staff teamwork, decision making, self-confidence, retention and creative problem solving, this workshop is a great place to start. It brings a creative environment to the business community where employees are invited to show their artistic side in a single concert performance or in a series of ongoing concert performances.

All participants will experience professional direction and the opportunity to express themselves in a supportive and non-competitive environment.

This unique program schedule includes rehearsals and is open to all acts including musicians, actors, dancers, comedians and poets from your company. CEO’s, full and part-time staff and support crew all are invited to participate as soloists or in an ensemble of their choosing. This is a fun way to get together with workers you may seldom get a chance to meet. Makes the workplace feel a little smaller and more intimate.

A separate workshop and performance is available for those who have had no stage experience as performers but would like to try it.

The aim is to bring fun, creativity and humor to your workplace while addressing some very important issues, such as: Personal gratification. Feeling good about coming to work. Building community spirit, which is important to the development of a positive and ...

The aim is to bring fun, creativity and humor to your workplace while addressing some very important issues, such as:

Building community spirit, which is important to the development of a positive and affirming workplace.

Better job performance and increased productivity–A natural outcome of the freedom of expression.

This workshop builds bridges and strengthens employee relationships to improve the overall health of your organization. It creates bonding across skill levels and reinforces group dynamics. When the company has a common goal it creates a common bond.

Chic Street Man is a uniquely talented artist with an international following. Chic Street Man is also a musical ambassador for peace and human rights who has spent more than thirty years as a performing artist. He transcends cultural and attitudinal barriers by bringing home his message of realistic optimism to his audiences through acoustic bluesy ballads, funky rhythms and jazzy up-beat originals.

Chic Street Man’s workshops use the stage to empower professionals, CEOs, students, speakers, managers, marketing and promotion specialists, public relations, athletes, media personalities, customer service, all entertainers, and technical support teams. These highly interactive workshop use storytelling, music, and theater techniques to create a dynamic place for participants to strengthen their ability to connect with others.

Chic incorporates a variety of musical forms all of which have roots that can be traced back to the ancient African tradition of storytelling with call and response. The stories are used for the purpose of spinning a tale, but always to instill in the listeners the spirit of an honorable life and the value of living in harmony with others; and to inspire them to make positive contributions to society.

Chic’s guitar is a natural extension of his body. He uses it and his voice to create music that transcends barriers of culture and attitude. His songs explore a love for people, music and the planet and allow the audience to feel, laugh and think about themselves in relationship to the world around them. Chic Street Man has the rare ability to engage all audiences; adults, teens, children, seniors and entire families to make them laugh, think and feel good inside

More About Chic Street Man . . .
Chic is a celebrated communications facilitator and has presented for many organizations, including The Young President’s Organization (YPO) in Austria, Switzerland, Australia and the USA. Chic Street Man has been a featured performer throughout Europe, including the Montreaux Jazz Festival and the United Nations Human Rights Center in Geneva. He was the composer for George C. Wolfe’s theatrical production Spunk.

Chic is a graduate of UC Santa Cruz with a B.S. Degree in Psychology. He served as Head of the Department of Psychodrama at a Community Hospital in Carmel, CA; the Executive Director of the ECHO – Fair Housing program in Hayward, CA; and the instructor of a class titled The Creative Process at Occidental College in L.A. before deciding to focus exclusively on his music.

Chic’s lyrics focus on the positive alternatives while entertaining in a spirited manner. His music transcends cultural barriers through acoustic bluesy ballads and funky upbeat originals.

He has been a featured performer at the Paleo Festival, the Montreux and Bern Jazz Festivals in Switzerland, the General Assembly of the United Nations in New York, and the United Nations Human Rights Center in Geneva. He recorded his first album in Paris, France in ’75 and later settled in Santa Barbara, CA where he founded Chic Street Man’s School of Performing Arts. Chic composed the music and starred in the off-Broadway hit show, Spunk, adapted by George C. Wolfe for which he was awarded the NAACP Theater Arts award and the Audelco award. He composed the score and starred in the Berkeley Repertory Theater’s production of The Caucasian Chalk Circle and the Cleveland Playhouse’s world premiere of Touch The Names–Letters to The Vietnam Veteran’s Memorial. He was a contributing author, performer and musical arranger for the Denver Center Theater Company’s It Ain’t Nothin’ But The Blues. He was the Arranger, Musical Director and Composer for the McCarter and Berkeley Repertory Theater’s production of Zora Neale Hurston’s Polk County, where he also won the San Francisco Bay Area Theatre Critic’s Circle Award for Musical Direction. Chic was Professor Slick in Pullman Porter Blues at the Seattle Rep, Arena Stage in DC and the Goodman Theater in Chicago. He was a featured performer in the Milwaukee Rep and Cincinnati Playhouse in the Park’s presentation of Low Down Dirty Blues, Search: Paul Clayton at the Martha’s Vineyard Playhouse and has appeared in the films Triple Bogey and Hangin’ With The Home Boys.  Chic has several album releases, including Guns Away, Everybody Be Yo’self,  Beau-ti-ful, Lullablues and Sidewinder. Chic was the subject of a DVD/Documentary Chic Street Man – Passin’ The Blues Along.

Chic is on faculty at the Seattle Conservatory of Music and the Heifetz International Music Institute in Staunton, VA.

“Chic Street Man’s presentation received the highest rating on our evaluation form of any of the weekly staff development sessions we had all year. His presentation showed us how to use ourselves and our environment to enhance our “performance” when teaching and leading groups. Specifically, we learned to use proxemics, non-verbal and para-verbal communication, group involvement and movement as devices to help create and maintain an audience’s attention and interest.”

“Chic Street Man’s ability to reach and bring together such a diverse group of individuals became evident…his high energy level and confidence created an environment which encouraged freedom of expression, risk taking, and enjoyment while learning…his comfort and ease, combined with the skills of master teaching, modeled the principles he sought to teach.”

“Chic Street Man created a fun, respectful and empowering experience for our student participants. The students left ‘feeling good’ about themselves and with one another, empowering them with courage, determination and personal skills to succeed in life.“

“Chic typifies the multi-talented gifted person. He is equally creative in writing, developing educational materials and in music. He is one of the most intelligent consultants we have employed at the Institute.”

“Chic’s program was thought provoking, moving and very entertaining. Best program I’ve seen. It was easy to see the crowd’s mood change…from individual employees who were attending a special emphasis program to an enthusiastic, participating, united group.” I walked away feeling uplifted and good about myself. His program will be talked about around ONR for a long time.” 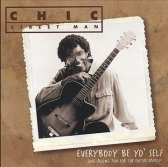