Peace is the Way

Deepak Chopra’s passionate new book was inspired by a saying from Mahatma Gandhi: “There is no way to peace. Peace is the way.” In a world where every path to peace has proved futile, the one strategy that hasn’t been tried is ...

Deepak Chopra’s passionate new book was inspired by a saying from Mahatma Gandhi: “There is no way to peace. Peace is the way.” In a world where every path to peace has proved futile, the one strategy that hasn’t been tried is the way of peace itself. “We must not bring one war to an end, or thirty,” Chopra tells us, “but the idea of war itself.”

How can this be done? By facing the truth that war is satisfying, and then substituting new satisfactions so that violence is no longer appealing. “War has become a habit. We reach for it the way a chain smoker reaches for a cigarette, promising to quit but somehow never kicking the habit” But Chopra tells us that peace has its own power, and our task now is to direct it and multiply it one person at a time.

Behind the numbing headlines of violence running out of control, there are unmistakable signs of a change—Chopra believes that a majority of people are ready to see an end to war. “Right now 23 million soldiers serve in armies around the world. Can’t we find ten times that number who will dedicate themselves to peace? A hundred times?”

Peace Is the Way challenges each of us to take the next leap in personal evolution. “You aren’t asked to be a saint, or to give up any belief. You are only asked to stop reacting out of fear, to change your allegiance from violence to peace.” In a practical seven-step program, Chopra shows the reader how to become a true peacemaker. “Violence may be innate in human nature, but so is its opposite: love. The next stage of humanity, the leap which we are poised to take, will be guided by the force of that love.” This is more than a hope or an aspiration. It is a new way of being in the world, giving each individual the power to end war in our time.

The Spontaneous Fulfillment of Desire: Harnessing the Infinite Power of Coincidence

According to Dr Chopra, beyond your physical self, beyond your thoughts and emotions, there lies a realm within you that is pure potential; in this place anything is possible. This part of you is interwoven with everything else that exists, and with ...

According to Dr Chopra, beyond your physical self, beyond your thoughts and emotions, there lies a realm within you that is pure potential; in this place anything is possible. This part of you is interwoven with everything else that exists, and with everything yet to come. Coincidences are messages from this place, precious clues about areas of our lives that require attention. When you live your life with an appreciation of coincidences and their meanings, you connect with the underlying field of infinite possibilities. This is when it becomes possible to achieve the spontaneous fulfillment of all desires.
At a time when events in the world have left many feeling especially insignificant and vulnerable, Dr Chopra gives specific principles and exercises that we can use as tools for catering the magnificence, miraculous life that is our birthright.

Blending scientific theory and ancient wisdom that is his best selling trademark, this exciting workshop will discuss:

•  Why coincidences are miracles in disguise how they’re happening more often than we’re aware.
•  How to live a life that will bring forth more magical coincidences.
•  How a random series of coincidences created the universe.
•  What science is learning about coincidences occurring at the molecular level and in nature.

Quantum Healing: How the Mind Directs the Body Towards Sickness or Health

The Higher Self: Awakening the Inner Intelligence

Deepak Chopra’s Key Accomplishments Include . . . Acknowledged as one of the world’s greatest leaders in the field of mind/body medicine, Deepak Chopra, MD continues to transform our understanding of the meaning of health. Deepak Chopra is the Founder and co-Chairman of the Chopra Center for Wellbeing in Carlsbad, California. He is also a columnist for the San Francisco Chronicle and Washington Post on faith and contributes regularly to Oprah.com, Intent.com, and the Huffington Post.

Deepak Chopra is known as a prolific author of nearly sixty four books with eighteen New York Times best sellers on mind-body health, spirituality, and peace. A global force in the field of human empowerment, Dr. Chopra’s books have been published in more than eighty languages in both fiction and non-fiction. His New York Times bestsellers, Peace Is the Way  received the Religion and Spirituality Quill Award in 2005, andThe Book of Secrets: Unlocking the Hidden Dimensions of Your Life was awarded the Grand Prize in the 2005 Nautilus Awards. His latest New York Times bestsellers include War of the Worldviews, Reinventing the Body, Resurrecting the Soul, and Muhammad: A Story of the Last Prophet. His book, The Soul of Leadership, was mentioned as one of five “best business books to read for your career” by the Wall Street Journal.

Deepak Chopra’s popularity as an international presenter and keynote speaker is exemplified in an impressive list of honorariums.  Dr. Chopra is the recipient of the 2010 Goi Peace Award, 2010, Starlite Humantarian Award, 2010 Art for Life Honoree, 2009 Oceana Partners Award, 2006 Ellis Island Medal of Honor presented by the National Ethnic Coalition of Organizations Foundation, and 2006 Trailblazer Award by the Scripps Center for Integrative Medicine, 2002 Einstein Humanitarian Award through Albert Einstein College of Medicine in collaboration with the American Journal of Psychotherapy.

Formerly the Chief of Staff at Boston Regional Medical Center, Deepak Chopra built a successful endocrinology practice in Boston in the 1980’s. Dr. Chopra’s teaching affiliations included Tufts University and Boston University Schools of Medicine. Dr. Chopra realized in his medical practice that there was potential in western medicine for the establishment of a new life-giving paradigm, one which encompassed the fundamental principle that perfect health is more than just the absence of disease.

Dr. Chopra participates annually as a lecturer at the Update in Internal Medicine event sponsored by Harvard Medical School, Department of Continuing Education and the Department of Medicine, Beth Israel Deaconess Medical Center since 1997.

Dr. Chopra is a fellow of the American College of Physicians, a member of the American Association of Clinical Endocrinologists, an Adjunct Professor of Executive Programs at the Kellogg School of Management at Northwestern University and a Senior Scientist with The Gallup Organization.

“My country has been enriched by the contributions of more than a million Indian Americans, which includes Dr. Deepak Chopra, the pioneer of alternative medicine.”

“A renowned physician and author, Deepak Chopra is undoubtedly one of the most lucid and inspired philosophers of our time.”

Citation of the Medal of the Presidency of the Italian Republic 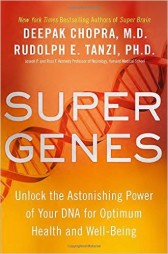 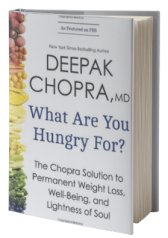 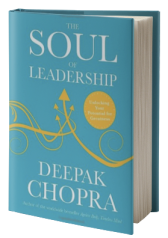