The Tao of Lifestyles

Some of Chungliang Al Huang’s Key Accomplishments Include…

Chungliang Al Huang, born in China, was immersed in the traditional study of tai ji, kung fu, brush calligraphy, and classic Chinese scholarly arts from a young age. In 1949, his family fled mainland China for Taiwan where he continued his studies. huang came to the united States in 1955 as a university student. his intuitive knowledge of the ancient wisdom and rich traditions of his native China led to early collaborations with philosophers and scholars such as Joseph needham, Joseph Campbell, Alan Watts, John Blofeld, Gregory Bateson, and Huston Smith.

In demand as both a keynote and motivational speaker at conferences and workshops around the world, huang returned to China in 1982 as a consultant to prominent American business groups. he is now the director of the International Lan Ting Institute with its Chinese base in the sacred Wu Yi Mountain, an UNESCO World Triple heritage Site rich with historic, religious, and cultural arts traditions; and its united States base in Gold Beach on the oregon coast. From the renowned Esalen Institute in Big Sur, California, to the world’s major capitals, he shares the stage with luminaries such as the

Dalai Lama and anthropologist/primatologist Jane Goodall. Huang also was featured in the 1988 inaugural segment of the PBS series A World of Ideas, moderated by Bill Moyers.

Architect, performing artist, brush calligrapher, Huang is also a celebrated author, with a number of best-selling books to his credit. These include the classic “Embrace Tiger, Return to Mountain”, which has been translated into 14 languages and is now in its 41st year of publication. Other popular titles include Essential Tai Ji, Quantum Soup, and The Chinese Book of Animal Powers. Huang is co-author of “Tao: The Watercourse Way” with Alan Watts and is co-author of a series of books with Jerry Lynch on sports/body/mind training including Thinking.  As a teacher/mentor and his intuitive knowledge of the intellectual and spiritual aspects of east- West synthesis, along with his total devotion to his students, have endeared him to thousands of people around the world.

“Chungliang Al Huang has found a new way to explain The Hero’s Journey. He helps others to follow their bliss through the experience of Tai Ji.”

“Chungliang Al Huang is a truly superior and gifted teacher who works upon others as the sun and rain upon plants.” 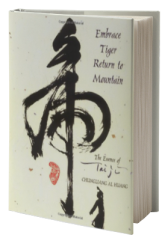