Learning Objectives: Unstoppable Purpose! Discover simple yet profound exercises that assist you in identifying a meaningful and inspiring life purpose that will propel you to new heights in every area of your ...

Unstoppable Purpose!
Discover simple yet profound exercises that assist you in identifying a meaningful and inspiring life purpose that will propel you to new heights in every area of your life…

Unstoppable Belief!
Master the steps to developing your belief system – one that motivates you to action, gives you confidence to ignore the critics and virtually guarantees outstanding achievement…

Unstoppable Preparation!
Create a blue-print for developing a clear vision of what you want to accomplish – and identifying the steps required to get there…

Unstoppable Team!
Uncover the best places to find inspirational role models and how to easily assemble your own inner circle of powerful, successful mentors who can guide, inspire and motivate you…

Unstoppable Creativity!
Follow sure-fire strategies to rejuvenate your dream when the going gets tough identifying new approaches to solving any problem…

Unstoppable Perseverance!
Internalize powerful strategies that will enable you to persevere long after others have given up and achieve your ultimate goal…four proven steps to creating more unstoppable moments in every area of your life.

IMPROVE SALES, PRODUCTIVITY AND PERFORMANCE WITH THE UNSTOPPABLE CHALLENGE! Based on the proven success principles that Cynthia Kersey has taught to tens of thousands of people, the “Unstoppable 30-Day Challenge...

IMPROVE SALES, PRODUCTIVITY AND PERFORMANCE WITH THE UNSTOPPABLE CHALLENGE!

Based on the proven success principles that Cynthia Kersey has taught to tens of thousands of people, the “Unstoppable 30-Day Challenge”, is the definitive program for jumpstarting your group into action to achieve a single breakthrough goal in just 30 days. This program skillfully combines inspirational stories, insights and anecdotes along with a proven 30-Day Challenge -designed to inspire people into action and create the foundation for further success.

Kersey’s extensive work with thousands of people from all walks of life-from corporate leaders to stay at home moms- led to the development of her hugely successful 30-Day Challenge. Its success lies in its simplicity as Kersey provides easy-to-understand guidance and achievable steps that even the busiest person has been able to successfully integrate into their life. She demonstrates how to create a series of unstoppable moments or “wins” that will become routine, like signing their name or brushing their teeth and ultimately delivering transformational results.

Unstoppable Breakthrough Goal:
Identify a 30-day goal that would make a significant impact in your business results.

Unstoppable Plan:
Break down your goal into 30 easy action steps based on a daily, proven, step-by-step system.

Unstoppable Motivators:
Create an unstoppable mindset by identifying your driving force behind this goal and identifying and replacing the limiting beliefs and behaviors that have stopped you in the past.

Unstoppable Team:
Develop a structure and accountability mechanism necessary to support you to successfully complete the Unstoppable 30-Day Challenge.

Unstoppable Rewards:
Uncover rewards and consequences for the completion of the 30-day challenge

Cynthia Kersey’s Accomplishments Include . . . What’s the secret to becoming unstoppable? Cynthia Kersey knows. In fact, she’s spent the last seven years researching and interviewing hundreds of America’s greatest achievers. In her best-selling book, UNSTOPPABLE, Cynthia Kersey reveals their secrets and traits and outlines a simple process that anyone can apply to create unstoppable results in their life.

UNSTOPPABLE has sold several hundred thousand copies in 13 languages, becoming a perennial bestseller. It was named by Publisher’s Weekly as one the best-selling paperbacks and it’s been a popular featured selection for Literary Guild and Double Day Book Club, among others. Her latest book UNSTOPPABLE Women, expands upon her success methodologies and focuses on women overcoming great odds, including news anchor Katie Couric and actor Camryn Manheim, and is filled with memorable, easy-to-accomplish agendas. The personal stories of Cynthia Kersey’s own triumphs are told “girlfriend to girlfriend.”

Cynthia Kersey’s personal story serves as the foundation for her unstoppable message; starting a career as a secretary, then rising to become a sales executive at Sprint Communications. She then left Corporate America in 1996 to pursue her dream of writing and encouraging people to live unstoppable lives.

Numerous Fortune 500 companies including Xerox, Johnson & Johnson and Aetna utilize Cynthia Kersey’s message and strategies. And within the direct-selling industry, Cynthia Kersey has given well over 100 keynote speeches and seminars as well as trained thousands of independent distributors from companies including Home Interiors & Gifts, Jafra, Noevir, Quixtar and Primerica. Cynthia Kersey’s message empowers individuals to build and maintain a successful business and to create a rich and meaningful life.

More About Cynthia Kersey. . .
Cynthia Kersey has appeared on hundreds of radio and television shows including The Oprah Winfrey Show. And UNSTOPPABLE has received rave reviews from national opinion makers and readers alike, including Scott DeGarmo, former editor of Success Magazine who believes “UNSTOPPABLE is this generation’s Think & Grow Rich.”

Cynthia Kersey’s passion is giving back and she established a non-profit foundation, to raise funds and awareness for women’s issues worldwide.

“Cynthia spoke at our national conference and I was so enthusiastic about her material that my entire sales team enrolled in her program. In 60 days, our sales volume skyrocketed 43%.” Cynthia’s material is a MUST for ANYONE who wants to create unstoppable results.

“Your ability to become Unstoppable is perhaps the most important single quality of great success and achievement. Cynthia Kersey shows you a series of simple yet powerful steps you can take to build your courage, tenacity & resilience to the point where you can achieve any goal you can set for yourself!” 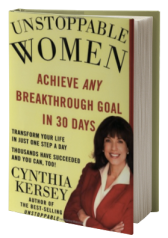