A Time for Heroes

Captain Gerald Coffee’s Key Accomplishments Include . . .
Born in Modesto, California, Gerald (Jerry) Coffee joined the Navy in 1957 after graduating from UCLA with a degree in Commercial Art.

In 1962, during the Cuban Missile Crisis as an F-8 Crusader pilot, Capt. Coffee was awarded the Distinguished Flying Cross for flying low level reconnaissance missions over Cuba, taking the photos ultimately used by the United States UN ambassador to prove the existence of Soviet missiles there.

In February of 1966, while flying combat missions over North Vietnam, Gerald Coffee’s RA5-C reconnaissance jet was downed by enemy fire. He parachuted safely but was captured immediately. For the next seven years Capt. Gerald Coffee was held as a POW in the Communist prisons of North Vietnam. After his repatriation in February, 1973, Capt. Coffee returned to operation duties. He retired from active duty in the Navy after 28 years of service.

For the past 20 years, Captain Gerald Coffee, has been considered one of the nation’s top speakers, sharing his experiences as a Vietnam POW and addressing thousands of people a year across a broad spectrum of corporate America and to international groups as well.

More About Captain Gerald Coffee . . .
In his message of going “Beyond Survival,” Gerald Coffee draws not only from insights derived from the prison experience, but also from the perspective of his unique experiences since then: earning a Masters degree in Political Science from Cal-Berkeley, studying at the prestigious National Defense University in Washington, D.C., Navy command and staff assignments, and his continuing interaction with hundreds of America’s corporations and associations as a professional speaker.

In a poll of corporate meeting planners, Captain Coffee was selected as one of “America’s Top Ten Speakers.” The prestigious Million Dollar Round Table selected Gerald Coffee as one of its top twelve most popular, highest-rated, main platform speakers for the past 20 years.

“Captain Coffee is the most powerful inspirational speaker I’ve ever heard. He will demonstrate how you can live life to its fullest and how to make all of life’s experiences positive ones. Hearing him is an unforgettable moving experience.”

“Capt. Coffee is one of the best guests I’ve ever interviewed. His story is fascinating and compelling. A real inspiration.” 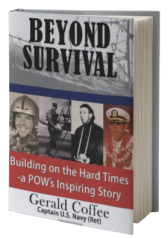