Energy, Intention and the Sacred Art of Healing: You Are the Medicine

Spiritual Direction: The Spiritual Journey in Health and Illness

Recovering the Heart and Soul of Nursing

Alternative and Complementary Medicine and Nursing

Care for the Caregivers

Janet F. Quinn’s Main Accomplishments Include . . .
Janet F. Quinn is a registered nurse, an associate professor and distinguished researcher of Therapeutic Touch. A dynamic, passionate and engaging speaker, Janet Quinn, R.N., Ph.D. is dedicated to creating a healing health care system, namely, one which values caring and healing of the whole person as much as the curing of diseases, and where all people have access to the full range of healing and curing modalities. At the heart of her work is a deep spiritual commitment to grow in love and service to others.

Janet Quinn earned a Ph.D. in Nursing Research and Theory Development at New York University, is a Registered Nurse in the State of Colorado, Elected Fellow of the American Academy of Nursing (FAAN) and Associate Professor at the University of Colorado School of Nursing, where she’s been teaching, researching and practicing Therapeutic Touch for over 30 years. Dr. Janet Quinn wrote and was featured in a series of teaching videotapes that the National League for Nursing produced on “Therapeutic Touch” and is author of I Am A Woman Finding My Voice: Celebrating the Extraordinary Blessings of Being a Woman. Janet Quinn has also been profiled in the New York Times and Time Magazine.

In addition to giving well over 200 keynote speeches, workshops and retreats during the last decade, Dr. Janet Quinn earned the Holistic Nurses Association’s “Holistic Nurse of the Year,” award the Professional Associates’ “Healer of the Year” distinction and was elected to the Hunter College Alumni Hall of Fame. 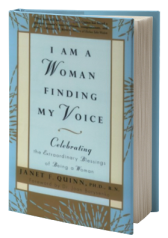