The Gold Medal Process: Eight steps to go from dreams to a winning reality

Eureka: How innovation Changes the Olympics and everything else

Awaken the Olympian Within: Tap the competitor inside you!

Over 1,000 audiences, including many of the Fortune 100
• Keynote Speaker, MC, Workshop Facilitator, Moderator

Author:
• “The Power of Character”, (contributing author), 1998
• “Eureka! How Innovation Changes the Olympics and Everything Else” 2004)
• “Awaken the Olympian Within: Stories from America’s Greatest Olympic Motivators” (2005)

“You had a profound impact at our recent Leadership Retreat. Your presentation highlighting the qualities of what it takes to be a real CHAMPION struck a chord with everyone in attendance and set the bar high for the remainder of our retreat.”

“Your professionalism, excitement, and material were a true highlight of our conference. The ongoing feedback from our members has been extremely positive, which is not at all surprising. The standing ovation was also, I believe, the first I have ever seen with this particular group, which is a testament to the powerful message you delivered.  I was particularly pleased with how you were able to integrate the mission of our group into your presentation as this really helped set the tone for the remainder of the meeting.”

“You took the time to understand our business value proposition around our ‘Partnership for Success’ and articulated that understanding clearly throughout your remarks. One of the evaluations we received succinctly stated what many of the participants felt: ‘John Naber was spectacular! He made me feel good about what we do.'”

“As you undoubtedly have heard, the audience was overwhelmed by not only the substance but the style of your presentation. In my considerable experience, I have never heard a motivational speaker who incorporated the meeting’s objectives and major emphasis points into the message as effectively as you do. Your ‘Gold Medal Performance’ truly set the gold standard for motivational presentations.”

“You really made a big hit with everyone by referencing specific situations and challenges we face at retail into your presentation. Your comments were right on target. Other companies could surely benefit from your presentation, but just not my competitors!”

“Your discussion on ‘Eight Steps to Gold Medal Performance’ was right on target… the Win/Win attitude you talked about along with your humorous Olympic stores will surely help all of us become champions in our personal and professional lives.” 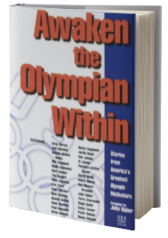