Dr. Patrick takes an incredibly complicated topic, breaks it down, and presents in a manner lay persons can understand. With no political bias, he articulates how healthcare cost is the number one problem, and outlines the components of the problem. He then describes solutions...

Dr. Patrick takes an incredibly complicated topic, breaks it down, and presents in a manner lay persons can understand. With no political bias, he articulates how healthcare cost is the number one problem, and outlines the components of the problem. He then describes solutions which can make American healthcare safer and more affordable.

John Patrick discusses:
• Healthcare cost: unnecessary tests and procedures, fraud, inefficiency, defensive medicine
• Patient safety and quality: Are our hospitals safe?
• Equity and access to healthcare. Is healthcare a right or a privilege
• How patients, providers, payers, and policymakers need to change their attitudes
• The rise of mHealth (mobile health) and how it is changing the relationship between patients and providers
• How mHealth is empowering consumers with medical data and self-diagnosis
• The emergence of population health
• Accountable care: How it works and where it is headed
• Can Medicare and Medicaid be combined?
• Should America have a single payer?

How Information Technology Can Save Healthcare In America

Dr. Patrick paints a positive vision of the solutions that can create meaningful change. His vision includes a system focused on patients and uses an accountability-oriented, fee-for-value model. He describes how leading-edge information technology, mobile, big data, analytics...

John Patrick discusses:
• How America’s healthcare compares to the systems in other countries
• The reasons behind the high cost of healthcare and how it can be reduced significantly
• How the lack of information sharing among hospitals, specialists, and primary care doctors limits the quality and safety of care
• The flood of new consumer-oriented technology that is emerging—including mobile devices, apps, and gadgets—and how they will transform relationships between patients and physicians
• How population health and accountable care organizations (ACOs) will change the cost and quality of healthcare
• The future of robots and 3-D printing in healthcare
• Whether healthcare is a right, a privilege, or a right which comes with responsibility
• A politically-neutral analysis of Obamacare; what works and what doesn’t

John R. Patrick is President of Attitude LLC and former Vice President of Internet Technology at IBM, where he worked for thirty-five years. While at IBM, he created a number of innovative programs including the alphaWorks Web site, which continues as IBM’s on-line research and development laboratory for advanced Internet technology, and IBM’s successful “Get Connected” program to expand the use of the Internet both within the company and to serve as a model for other companies. Patrick joined IBM in 1967 and spent the first half of his career in various sales, marketing and management positions. He was a pioneer and developer of IBM’s leasing business at IBM Credit Corporation, which became the largest computer leasing company in the world. Patrick was subsequently the chief financial officer of various business units of IBM and was also vice president of operations for IBM’s Computer Integrated Manufacturing Business. In 1992, he became vice president of marketing for IBM’s Personal Systems Division and was the senior marketing executive responsible for introducing the successful ThinkPad brand. One of the leading Internet visionaries, Patrick is a well-known international lecturer and has been quoted frequently in the global media. Business 2.0 named him one of The 25 Most Intriguing Minds of the New Economy.

Patrick was a founding member of the World Wide Web Consortium at MIT in 1994, a founding member and past chairman of the Global Internet Project, a member of the Internet Society, the American College of Healthcare Executives, a senior member of the Association for Computing Machinery, and a Fellow of the Institute of Electrical and Electronics Engineers. He has been a business and technology advisor to numerous companies, is a board member at MecklerMedia, Inc. and OCLC Online Computer Library Center, Inc. He is a member of the Western Connecticut Health Network Biomedical Research Institute Advisory Council.

In 2001, Patrick’s book Net Attitude: What It Is, How to Get It, and Why Your Company Can’t Survive Without It was reviewed by Lou Dobbs, of CNN’s MoneyLine who says: “John Patrick is one of the Web’s most respective pioneers and thinkers.” His 2015 book release, Health Attitude: Unraveling and Solving the Complexities of Healthcare received wide acclaim “When we look back ten years from now on the revolution that occurred in healthcare, John Patrick’s Health Attitude will be viewed as one of the prologues of that revolution,” says Stephen Klasko, MD President and CEO of Thomas Jefferson University.

Patrick earned a B.S. in Electrical Engineering from Lehigh University and an M.S. in Management from the University of South Florida. He also has a law degree (LL.B.) from LaSalle University, which he earned during his military service. A lifelong learner, Patrick earned a doctorate in healthcare administration (DHA) in 2014. 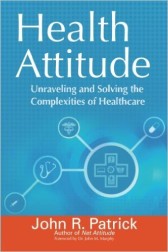