Play If it's not one thing, it's your mother: Julia Sweeney

Julia Sweeney’s Main Accomplishments Include . . .
Julia Sweeney is best known for her four hit seasons on Saturday Night Live and her most popular character while on that show “Pat”. As a solo performer, Julia Sweeney explores the issues of love, cancer, family and faith. She has garnered critical acclaim for her one-person-shows, God Said, “Ha!”, In The Family Way, and Letting Go of God. God Said, “Ha!” played on Broadway at the Lyceum Theater in 1996 and was released as a film, produced by Quentin Tarantino, in 1998. Letting Go of God has also been made into a film.

Julia Sweeney started her acting career in Los Angeles at The Groundlings Theater, a well known improvisational and sketch comedy company. It was there that she met fellow SNL cast members Phil Hartman and Jon Lovitz, and where Saturday Night Live producer Lorne Michaels tapped her for the late-night show. Julia Sweeney spun one of her most popular characters into the feature film It’s Pat and after leaving Saturday Night Live, and moved back to Los Angeles. Despite the film’s disappointing box office performance, it gained a cult following that continues today.

Within a matter of months, after moving back to L.A., Julia Sweeney’s brother Michael was diagnosed with cancer…and so was she. Julia’s experiences led her to write and star in God Said, “Ha!‘ Produced by Quentin Tarantino, the film version of the play earned the Seattle International Film Festival’s “Golden Space Needle Award” for best directing, while Julia Sweeney’s recording earned her a Grammy nomination for best comedy album.

Julia Sweeney is continuously carving out her own territory in entertainment, one that moves between the personal and the political, the controversial and the comical. Her most recent piece traces a spiritual journey that takes an unexpected turn. In all her performances, Julia Sweeney projects a warmth and sincerity on stage that’s unmatched in today’s theater;you immediately feel you’re chatting with an old friend. And this gift of intimacy allows her to achieve the impossible: utterly disarming performances that honestly confront some of the most controversial topics of our times.

Julia Sweeney’s third monologue, Letting Go of God ran for ten months to sold-out crowds in Los Angeles, and then also played in New York City and has also been made into a film. This show has earned Julia Sweeney the best reviews she has ever received for her stage work.

Julia Sweeney is originally from Spokane, Washington and she attended the University of Washington in Seattle, majoring in Economics and European History.

Julia Sweeney lives near Chicago with her husband and daughter.

“Without breaking her affably conversational tone, in Letting Go of God she inhabits the emotional memory of each step on her path. It’s refreshingly unrancorous, lucid and, yes, inspirational.”

“Julia is an amazing woman – so down to earth, kind and funny.  Everyone loved her talk- we even had some who said she was the best keynote we’ve ever had!!” 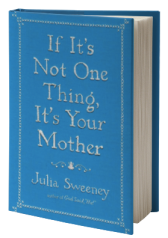