An Evening with Dan Rather

Perspectives on Major Social Issues of Our Time

Rather Outspoken: What I've Learned from a Lifetime of Reporting

Fact vs. Fiction in Journalism: Misinformation & the Internet

Leadership Principles from the World's Most Powerful Leaders

The Truth Behind Truth: The Story of a Great News Story

Robert Redford plays Dan Rather on the big screen, in James Vanderbilt’s October 2015 fact-based drama Truth, based on news story that became known as Rathergate. In 2004, a “60 Minutes” team, led by producer Mary Mapes and spearheaded by Rather’...

Robert Redford plays Dan Rather on the big screen, in James Vanderbilt’s October 2015 fact-based drama Truth, based on news story that became known as Rathergate. In 2004, a “60 Minutes” team, led by producer Mary Mapes and spearheaded by Rather’s legendary reporting prowess, discovered in the middle of the Presidential election that incumbent leader George W. Bush might not have fulfilled his National Guard service during the Vietnam War. A scandal ensued, an investigation was launched, and the blowback that resulted underscored what the world knew and loved about Rather all along — that his propensity for asking questions and pushing stories to their furthest depths placed him among the front rank of newsmen in history — even when his facts were questioned. In this presentation examining all the powerful influences that impact what we see as the news, Rather delves into the finer points of Truth. Coinciding with the movie’s theatrical release, Rather re-visits one big story from his storied career to illustrate his working methods and demonstrate how breaking news plays out in the country and the world at large.

About Keynote Speaker Dan Rather

Dan Rather is one of the most recognized and renowned reporters of our time and he is often called the voice, heart, and soul of American journalism. Dan Rather is well-known for his humor, colorful speaking style and the home-spun “Ratherisms” that he has used with greatest exuberance in his election coverage. As a speaker, few can match the authority, experience, and perspective Dan Rather offers on world events and the passion he displays in defense of journalism.

For more than 50 years, former CBS News anchor and 60 Minutes correspondent Dan Rather has been the embodiment of the intrepid broadcast journalist. He has covered every major story of our time, with distinction and a fierce dedication to hard news – from the Kennedy assassination, where he was the first to break the news that the president had been killed – to the Indian Ocean tsunami. On the domestic front, Rather has covered nearly every major story, from the tragedy of 9/11 to President Clinton’s impeachment. Rather has reported on the Watergate, Civil Rights Movement, and every presidential campaign since 1952. He brings us the real story with grace, humanity, and depth, often covering most important social issues such as substance use disorders, mental health, and homelessness and poverty.

He was awarded with virtually every honor in broadcast journalism, including the 2012 Edward R. Murrow Award for Lifetime Achievement, a Peabody Award, the CPJ Burton Benjamin Memorial Award, numerous Emmy Awards, and citations from critical, scholarly, professional, and charitable organizations, Rather never lost his drive for front-line journalism. After leaving CBS News, he pioneered a cable news magazine program doing exactly the kind of in-depth international and investigative reporting that is not present on television that much nowadays. Always looking to innovate new avenues for quality journalism, Dan has now launched a production company called “New & Guts.” He is developing a series of projects ranging from an acclaimed interview program on AXS TV to documentaries and digital video content. His continued restlessness in pursuit of excellence would be evident to anyone who read his entertaining memoir Rather Outspoken: My Life in the News, published in 2012.

Most recently, Rather was played by Robert Redford on the big screen, in James Vanderbilt’s critically acclaimed drama Truth, recounting the story that became known as Rathergate, in which a “60 Minutes” team, led by producer Mary Mapes and spearheaded by Rather’s meticulous reporting skills, discovered in the middle of the Presidential election that incumbent leader George W. Bush might not have fulfilled his National Guard service during the Vietnam War. The movie was first shown at the Toronto Film Festival and went on to a successful theatrical release in October 2015.

Mr. Rather was our best speaker to date. I received nothing but compliments about Mr. Rather and I am so pleased with the magnitude of responses. The Celebration Dinner was a wonderful and successful event, and it is due in large part to the fantastic keynote speech delivered by Mr. Rather. He was absolutely the icing on the cake for all the ACC members to cherish forever. Please thank Mr. Rather for honoring us with his presence and giving us his valued perspective on world events, like only he could do, with style and grace.

We’ve had great feedback regarding the event as a whole as well as Dan Rather as a guest. We would highly recommend him. The attendees really enjoyed seeing the speaker engaged throughout the program and not just during the keynote. Thank you!

The event was wonderful. We thoroughly enjoyed having Mr. Rather and he was gracious and kind and very easy to work with. It was a very interesting program. Thank you for all of your help with the event!

The event went extremely well. The audience was one of the largest we’ve had, perhaps 1800 people. Mr. Rather is an absolute gentleman, wonderful to work with, and captivating from beginning to end.

Mr. Rather was such a pleasure to have on campus. I have received so many compliments from our students, faculty/staff, and community! Thank you for all of your help with information and coordination. You helped us to make the event a success!

Your presentation was entertaining, insightful and wise. I especially appreciate the remarks you directed to our students about following their passion and preparing themselves to excel. I also gained a great deal from your assessment of news as entertainment and the risks we incur from the current trends. 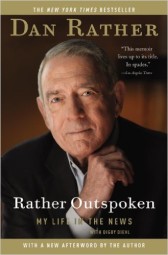