Professor of Strategy and Entrepreneurship at the London Business School, Senior Lecturer in Strategy at the MIT Sloan School of Management

How To Thrive In Turbulent Markets

Donald Sull’s Key Accomplishments Include . . .
Dr. Donald N. Sull is a global expert on strategy and execution in turbulent markets. He is a Visiting Professor of Strategy and Entrepreneurship at the London Business School and a Senior Lecturer in Strategy at the MIT Sloan School of Management.

Don Sull has also published five award-winning books, ten best-selling Harvard Business Review articles, and over 100 case studies, articles, and book chapters on strategy and execution in turbulent markets. The Economist named him “a rising star in a new generation of management gurus,” and identified his theory of active inertia as an idea that shaped business management over the past century. Fortune listed him among the “Ten New Management Gurus.”

Dr. Sull teaches Executing Strategy for Results at the London Business School, where he has won three teaching awards. In his tenure as the school’s Faculty Director of Executive Education, Sull led a turnaround of the $50 million business in the midst of a recession. He instituted a board of directors, oversaw the formulation of a new strategy, built a new management team, and helped build the organizational capability to execute on the new strategy. At MIT, Sull teaches MBA electives on Competitive Strategy and Executing Strategy in Volatile Markets.

Don Sull has served as a director of the Business Strategy Review, London Business School’s quarterly journal, and as an academic advisory board member of the McKinsey Quarterly. He is currently a judge for the Harvard Business Review’s McKinsey Award, which recognizes the best articles published each year in that magazine.

More About Speaker, Don Sull . . .
Prior to academia, Donald Sull worked as a strategy consultant with McKinsey & Company, and a management-investor with the leveraged buyout firm Clayton, Dubilier & Rice. He is an active investor in start-ups and advises the top management teams of several leading multinationals including Royal Bank of Canada, Standard Chartered, Baker & McKenzie, Burberry, Investec, PIMCO, and several members of the Young Presidents’ Organization.

“Don Sull possesses a CV which has guru written all over it.”

“Dr. Sull gave me deep insights into leadership issues and setting strategic directions. I will implement many ideas, step by step, into my organization.”

“Without doubt the work that I did with you in May was a great help and will continue to help me as I prepare to develop my new organization.”

“Thanks again for addressing our management team this past week. You were outstanding and the ground you covered hit home with respect to where we are as a company in transition. Feedback from my colleagues, well, is over the top—you were a big hit and the input gained will definitely contribute to our progress.” 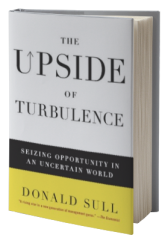