Environmentalist and Host of The Nature of Things

The Legacy: An Elder's Vision for Our Sustainable Future

How Protecting Our Planet Improves the Economy

David Suzuki is one of the world’s most recognizable and influential environmentalists. In a long and distinguished public career, he has, perhaps more than almost anyone else, raised public consciousness about environmental issues and inspired massive efforts to preserve and protect our natural world.

David Suzuki has made it his life’s work to help humanity understand, appreciate, respect and protect nature. A gifted interpreter of science and nature, Suzuki provides audiences with a compelling look at the state of our environment, underscoring both the successes we have achieved in the battle for environmental sustainability, and the strides we still have to make if Earth will remain a welcoming home for all nature’s creatures. Both inspiring and realistic, he offers leading-edge insights into sustainable development and model for a world in which humanity can live well and still protect our environment.

Suzuki is a scientist, broadcaster, author, and co-founder of the David Suzuki Foundation. He is Companion to the Order of Canada and a recipient of UNESCO’s Kalinga Prize for science, the United Nations Environment Program medal, the 2012 Inamori Ethics Prize, the 2009 Right Livelihood Award, and UNEP’s Global 500; and was named one of Canada’s Greatest Explorers by Canadian Geographic. Suzuki is Professor Emeritus at the University of British Columbia in Vancouver and holds 28 honorary degrees from universities around the world. He is familiar to television audiences as host of the CBC science and natural history television series The Nature of Things, and to radio audiences as the original host of CBC Radio’s Quirks and Quarks, as well as the acclaimed series It’s a Matter of Survival and From Naked Ape to Superspecies. In 1990 he co-founded with Dr. Tara Cullis, The David Suzuki Foundation to “collaborate with Canadians from all walks of life including government and business, to conserve our environment and find solutions that will create a sustainable Canada through science-based research, education and policy work.” His written work includes more than 56 books, 19 of them for children. Suzuki lives with his wife and family in Vancouver, B.C. 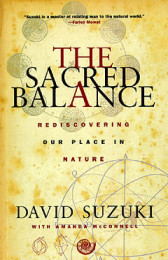 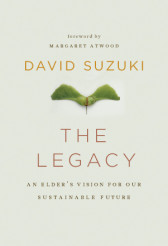