In February 2015, Lindsey launched the Lindsey Vonn Foundation. Staying true to Lindsey’s values, LVF is a non-profit with the goal of empowering young girls to grow as athletes and individuals through opportunities and experiences that build self-esteem and create positive self-image. In November 2016, People magazine named Lindsey and LVF to its “25 Women Changing the World” list. Recently added to The New York Times’ Best Sellers List, Lindsey’s book, Strong is the New Beautiful, debuted in October 2016.

Vonn grew up in the Twin Cities area (Burnsville),  and was on skis at age two before moving into Erich Sailer’s renowned US Ski and Snowboard Association program at Buck Hill. Before she was 10, the rising US Ski Team star, Picabo Street, became her hero. When Street won the 1995 World Cup Downhill title, the 10-year-old vowed she would do the same one day. She commuted to Ski Club Vail for a couple of years before her family moved to Vail in the late 90s. Vonn continues to reside in Vail. 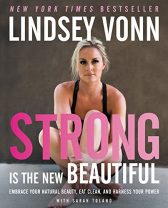