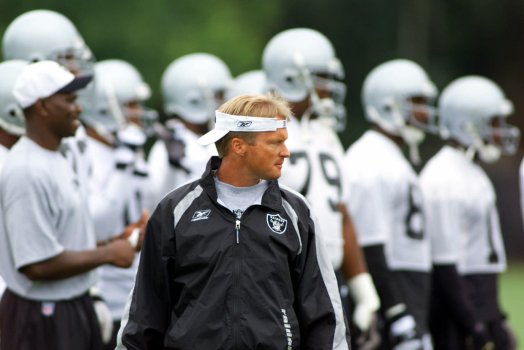 Jon Gruden is back. In a full-circle, head-spinning move, Jon Gruden returns to the franchise where his head coach career first started: the Oakland Raiders.

Many will remember Gruden stalking the sidelines and his angry outbursts as he brought the Raiders to the verge of Super Bowl stardom before being traded to the Tampa Buccaneers for four draft picks and 8 million dollars.

The next year, Gruden had the last word as he took the Buccaneers franchise to Super Bowl stardom, defeating the Raiders 48-21 at Super Bowl XXXVII in what can only be called karmic revenge.

After retiring from football, Gruden found new success as an NFL ESPN analyst, where his insight and commentary on Monday Night Football and other programs earned him 7 Sports Emmy nominations between 2009-2017.

Flash forward twenty years after becoming the Raiders head coach in 1998, Gruden is back in Oakland where his winning football career started (100-85 game record, five division titles with two different teams, and one Super Bowl ring with the Buccaneers). The owners awarded him a whopping 10 year, 100 million dollar contract.

However, his stay in Oakland won’t be for long. Gruden isn’t leaving, though. Instead, the team is moving to Nevada.

In 2017, the NFL approved the Raiders wish to move away from its passionate fan base in Oakland to a new home in Las Vegas. While the moving trucks won’t be arriving for a year or two as the logistics of the relocation are worked out, it’s possible the Raiders could be playing in Sin City as soon as 2019.

Until then, Gruden brings back his fiery personality, passion for winning, and his football genius back to the game he loves.

Welcome back, Jon. We can’t wait.