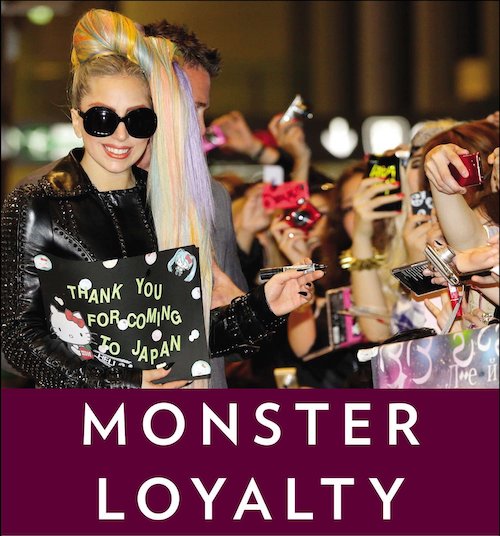 What Can We Learn About Customer Loyalty From Lady Gaga?

Lady Gaga has wooed audiences with her soul-scraping voice and lyrics, wowed them with her outrageous stage presentations, and engaged them with her unembarrassed and unwavering dedication to her individuality.

But one of her most striking achievements has been her tremendous success with her modern, savvy marketing.

“One of the things that she does really, really well is build a passionate fan base by focusing on a tiny percentage most of the time,” said Jackie Huba, customer loyalty expert and author of Creating Customer Evangelists: How Loyal Customers Become a Volunteer Sales Force.

Huba admits that focusing on such a small demographic is counterintuitive to most traditional marketing strategies that tend to go for a larger audience. However, it’s the immense loyalty from Gaga’s most diehard fans who ultimately serve as her free publicity soldiers. Gaga has used the top 1% of her most engaged community of online customers to push her messaging through to the wider community.

“The one-percenters can often be crazy fanatics,” said Huba of why marketers tend to dismiss their value. “They’re deeply involved and many companies look at these people like they are weirdos.”  But, it’s harnessing this unusual and emotional devotion that is so valuable.

So how do you go Gaga and make this work in your business?

Take the time to identify your one-percenters and then think about how to connect with them because whatever they think of you, they’re going to tell the world. The word-of-mouth-network is now the driving force behind social media campaigns.

How do you help the people who love you promote you — be it online or offline?

“Lady Gaga is really upfront and vocal on what are her values,” said Huba.

This idea was supported by research done by Jim Stengel of Proctor & Gamble that shows that companies that led with value resulted in a 400% increase in financial performance than those on the aggregate of the S&P 500 over 10 years. “This isn’t just a warm and fuzzy ‘we should lead with our values’,” said Huba. “It really makes business sense.”

Is there something emotional or inspirational about you and how you’re changing the world that will make people want to connect with you?

Not only does Gaga use premeditated theatrics and substantive, personalized social commentary to keep her one-percenters engaged, she also created a dedicated social platform for them to share stories, post art, connect with each other and occasionally chat with her. Yes, Gaga takes the time to come online to share personal information about new styles and hair, successful workouts, and maybe even new relationships and then she often signs off by telling her “Little Monsters” that she loves them and thanks them for being part of her community.

It’s no mystery why she is one of the world’s most popular social media influencer with her 41 million Twitter followers and 63 million Facebook fans willing to hit the streets to convert other music fans into “Little Monsters.”

What can you do to get your fans talking?

Carolina Starin is a reporter, storyteller, and television, radio and podcast producer. Her varied work has been seen on CNN, The Wall Street Journal, Medium, KCRW and The Moscow Times. She holds a master’s in international business policy from Columbia University.