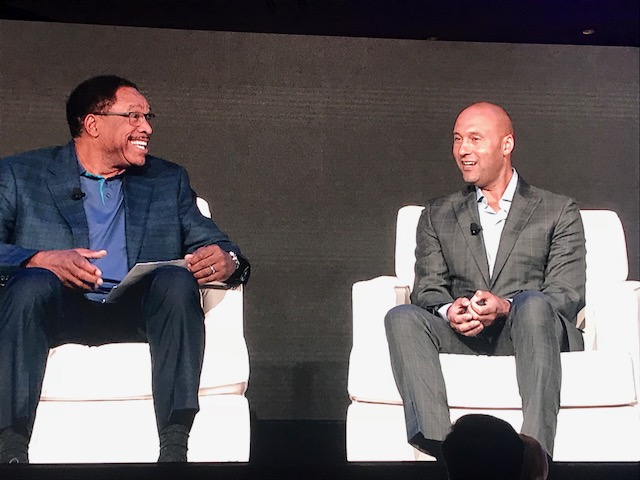 “I didn’t know what it was gonna take to get here and all I can say is that had I known that I was gonna be up here one day, I sure would have saved all my rookie cards.”


If you know baseball, you know Hall of Famer Dave Winfield. Besides an impressive MLB career spanning 22 years, more than 3,000 hits, and over 450 home runs, Winfield holds the distinction of the only athlete ever drafted into four professional sports leagues—NBA, ABA, NFL, and MLB—and the first active athlete to create a 501(c)(3) charitable foundation.

After years of working as an analyst for Fox Sports and ESPN, Winfield now splits his time between working for the MLB Players Association, delivering well-received motivational keynotes, and moderating talks like the one he did with baseball legend Derek Jeter on Sept. 25 in Santa Barbara.

Though Winfield and Jeter played in different eras of the game, they were no strangers. The two first met when Jeter was a rookie. Winfield recalled speaking at a rookie career development seminar and how Jeter peppered him with questions over the course of the event. A relationship was formed and they kept in contact throughout Jeter’s career.

Over the course of a half-hour moderated talk at the Ritz-Carlton Bacara Hotel, Winfield deftly guided Jeter through questions about sports, business, and community service; success and leadership, and brands for companies and individuals.

The two found common ground on giving a voice to players. Winfield gives voice to baseball players as a member of the MLB Players Association while Derek Jeter gives players a voice through his new media service, The Players’ Tribune, where players can connect directly to fans in their own words.

The two giants of baseball also connected on what it takes to succeed in the sport. They both agreed you need to be surrounded by a good team. Jeter was fortunate to have a supportive family as well as meeting other successful athletes, like Michael Jordan, to guide him through the process of being in the national spotlight.

Not only did they agree it was important to have a good team, but to do well, you must also be quiet and listen. When you listen you learn a lot more.

After the moderated talk, Winfield took a few moments to share that he is now working with the MLB Players Association on post-career opportunities for players.

If you’re interested in booking Winfield for a motivational talk, leadership keynote, or moderated session, and learning more about his past or current endeavors contact BigSpeak Speakers Bureau.