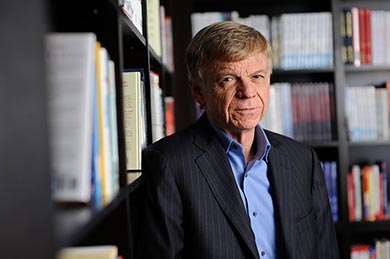 Back in November of 2012, we featured an overview of a new organizational paradigm, posited by change management and leadership authority John Kotter in that month’s Harvard Business Review (where Kotter enjoys the distinction of being one of its most reprinted contributors). Originally entitled Change Faster: How to build adaptive genius in your organization it outlined Kotter’s contention that the traditional hierarchic structure of most companies works well as a standard operating system for handling the day-to-day business, but lacks the agility and framework to address rapid, complex changes and innovation.

He proposed a new framework for competing and winning in a world of constant turbulence and disruption based on a parallel-universe-like model or second operating system, which continually assesses both the industry and the organization, and reacts with greater agility, speed, and creativity than the existing one.

It works in concert with and complements the traditional hierarchy, which in turn, makes the enterprise easier to run and accelerates strategic change.Since then, Kotter has expanded his concept into a complete book due out April 8th, entitled XLR8 (Accelerate) Building Strategic Agility for a Faster-Moving World, picking up where the original HBR article left off. In Accelerate (XLR8) Kotter, utilizing many of his familiar tenets (creating urgency, generating buy-in), illustrates the five core principles underlying the new network system, the eight Accelerators that drive it, and perhaps most crucial, the book reveals how the best companies focus and align this energy and urgency around what Kotter calls the big opportunity – a confluence of conditions facing an organization that create a rare chance to leap ahead through a transformative change.