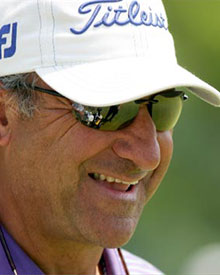 BigSpeak’s Golf Guru and Performance Expert, Bob Rotella is once again rocking the fairway. Last month, Rotella disciple, Graeme McDowell won the U.S. Open at Pebble Beach, becoming the first Irishman to accomplish the feat, and the first European U.S. Open winner since Tony Jacklin in 1970. He was also the first British winner of a major championship since Paul Lawrie in 1999. McDowell was only the second European to win the U.S. Open since 1925. He rose to number 13 in the world rankings, a career high, and became the eighth European in the top 15.

McDowell’s first Major win has also cemented his place in Europe’s Ryder Cup Team to face the United States in Wales this October.The victory is one of many for Rotella, who counts champion golfers Ernie Els and Padraig Harrington among his clients.

We wish Bob the best as he leaves Sunday to join several of his players who recently qualified for the British Open.