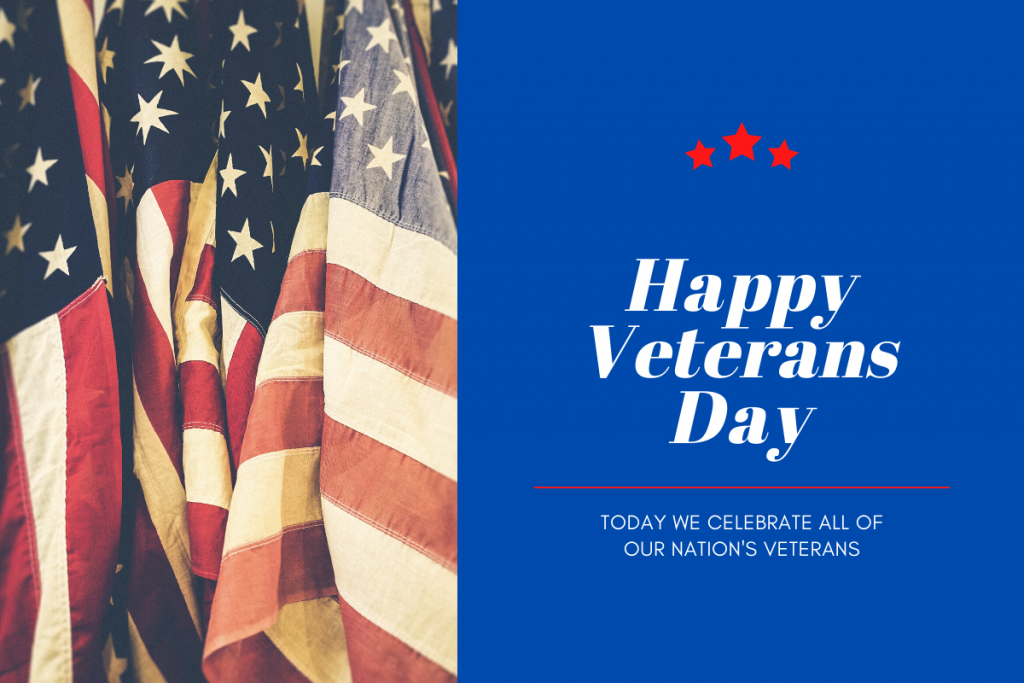 This Veterans Day, we celebrate all the Veterans in our BigSpeak Family who have served or who are continuing to serve in the United States military and armed forces.  We recognize the sacrifices you all have made to protect our country!

BigSpeak has a long history of Veteran family members, starting with our founder’s grandfather Captain Benyaurd Wygant, who served in three wars, starting with the Spanish-American War of 1898.  He served as the commander of several Naval destroyers such as the USS Tucker, the USS Cleveland, the USS Colorado, and the USS West Virginia.  Captain Wygant completed five years of service as the Commanding Officer of the United States Naval Reserve Midshipmen’s School at Northwestern University from 1940 to 1945.  Wygant was awarded the Navy Cross for his actions during World War I and the Legion of Merit for actions during World War II.  In addition to Captain Wygant, several of our team have military family members who protected our borders and freedom, such as Colonel Daniel Henderson, USAF; Sergeant Jerry Ehrlich, USMC; Captain Fred Hershman, USCG; Michael Hixson, US Army;  Victor Donati, USAF; Lieutenant Harry Sterling, US Army; William J. Nasif, US Army; and many more loved ones who served our country.  Other friends of BigSpeak include Evan Hafer and Mat Best of Black Rifle Coffee.  Mat is also the bestselling author of Thank You For My Service.

Recently, we were discussing the difference between Veterans Day and Memorial Day.  Did you know that Veterans Day is recognized to honor all those who have served or are currently serving our country, whereas Memorial Day is a time to remember and reflect on those who lost their lives in service of our country? All in all, we owe a debt of gratitude to all military members and their families.

For today, we are celebrating these special people in our lives:

Thomas A. Kolditz is a retired Brigadier General who served on four continents in his 34 years of military service.  Tom is the author of In Extremis Leadership: Leading as if Your Life Depended on It, which recounts more than 175 interviews in Iraq during his combat operations.  Tom translates his military experience into profound lessons for leaders in any setting.

Vernice FlyGirl Armour is America’s first African-American female combat pilot and the author of Zero to Breakthrough.  FlyGirl was a Diversity Liaison Office at the Pentagon for Headquarters Marine Corps and has received numerous awards as a pioneering pilot.  She is a dynamic keynote speaker who helps business leaders and female entrepreneurs take risks and get breakthrough results.

Carey Lohenz is a former Navy Pilot who was the first female F-14 Tomcat Fighter Pilot in the U.S.Navy.  She has flown missions worldwide as a combat-mission-ready United States Navy pilot.  Carey relays her experience of flying on aircraft carriers to exhibit how teams can succeed in this high-risk, time-crunched world.

Jocko Willink is a former Navy SEAL, who lead Task Unit Bruiser, SEAL Team THREE in some of the Iraq war’s toughest combat as part of The Battle Ramadi.  Over his 20 year career, Willink received the Bronze Star with Combat “V” for his tour in Iraq as a platoon commander and was awarded the Silver Star for his leadership of Task Unit Bruiser.  With all this experience, Willink offers companies exceptional insight into leadership and team management.

Colonel Nicole Malachowiski is a 21-year Air Force veteran and the first female Thunderbird pilot.  A former fighter squadron commander and mission-ready pilot in three operational fighter squadrons, she earned her place as an inductee into the Women in Aviation International Pioneer Hall of Female.  Nicole offers organizations lessons on leadership, followership, and overcoming adversity, helping audiences set in motion their own unbeatable spirit in order to succeed far beyond what they think they can accomplish.

MK Palmore is a former midshipman at the United States Naval Academy and a former commissioned offers in the United States Marine Corps.  After his time in the military, MK started a 22-year career as a Special Agent of the Federal Bureau of Investigation.  He offers leadership consulting in areas of cybersecurity and crisis response and management.

And finally, none other than our very own Max Peck. Max is a Marine Corps Seargent veteran who joined the Marines after high school.  He served a 5-year term, with 3 tours in APAC and the Middle East, including anti-terrorism and classified intelligence-gathering operations.  Max earned the Navy and Marine Corps Achievement Medal for his exemplary performance during combat operations and was promoted to a leadership role as a noncommissioned officer. After retiring from the Marine Corps, Max volunteered as Veteran’s Liason at the University of California and he remains active in veteran activities.

Veterans Day signifies a day to thank those who are serving or have served.  We encourage all of you to ask your friends and family if they served, listen to their time in the service, and most importantly, extend your gratitude for their service.  In case we missed listing one of your favorite armed forces experts, here is a more detailed list.

To all those who have served or are currently serving, Happy Veterans Day and we appreciate your sacrifices to protect us.

p.s. if you’d like to thank a Veteran in person, here’s a suggestion instead of the cliche, “Thank you for your service.” Try something a bit more personal. How about “Thank you for making sacrifices to protect our liberty and borders.” Or, “I thought about joining back in the day and chickened out. I’m thankful for you and how you protected us…”