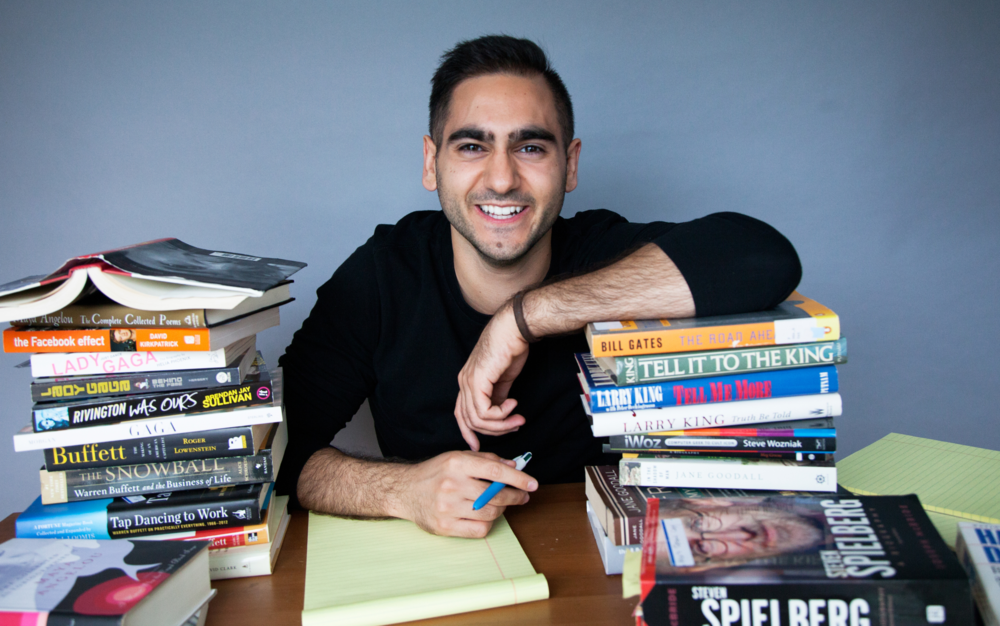 Forbes’ “30 Under 30” and Business Insider’s “Most Powerful People Under 30,” Alex Banayan, gained those accolades by skipping out on studying for his Freshman college finals to audition for The Price is Right.

He won a sailboat as a contestant on the show and despite his disinterest in weathering the seas, this detour from academia turned out to be the best decision he ever made.

With the money he pocketed from selling the boat, Banayan could finally invest in his real fascination—discovering the key to success. He embarked on a quest to figure out how the world’s most successful people launched their careers. That meant chasing down and getting the attention of some of the most famous; not to mention, busiest people in the world.

He ended up trading his dorm room for exclusive parties with Steven Spielberg, the dressing room of Lady Gaga, and the secret office of Bill Gates. He spent years nagging celebrities for interviews, trying to understand how someone can go from being rejected by every film school to the most decorated director in Hollywood or from waiting tables to singing in the Super Bowl halftime show.

He surveyed people from contrasting backgrounds in different industries, and after talking to as many A-list stars, business moguls, and creative geniuses as he could, he found an answer.

These celebrities all took the third door.

What does that mean? In his upcoming book The Third Door (being released June 5, 2018), Alex Banayan describes the third door by comparing success to a nightclub.

There are always three ways in. There’s the First Door: the main entrance, where 99 percent of people wait in line, hoping to get in. The Second Door: the VIP entrance, where the billionaires and celebrities slip through. But what no one tells you is that there is always, always…the Third Door. It’s the entrance where you have to jump out of line, run down the alley, bang on the door a hundred times, climb over a dumpster, crack open the window, sneak through the kitchen—there’s always a way.

He discusses the secret to being successful even if you were never invited in through the second door. Banayan focuses on celebrities who used true grit and determination to become the self-made public figures they are today. These icons are famous because they didn’t wait in line with the rest of the world. Instead, they got crafty and found their own third door.

Banayan found his own third door. With a wad of cash from hacking a game show, he pursued success through various forms of “sneaking in the back door”. During his quest to find the secret to success he met with members of a high-tech venture capital firm, Alsop Louie Partners. Within months he went from ordinary college student to the world’s youngest Venture Capitalist.

Banayan made it into the nightclub of success at such a young age because of his unique idea to simply search for it.

After speaking at a conference for Apple, people said “Banayan represents the voice of entrepreneurship, the power of hustle, and the energy of unlimited potential. “ All of which are channeled into his upcoming business self-help book.

So, if you feel like you’ve been waiting in line your whole life, pre-order a copy of Alex Banayan’s book The Third Door and learn how to find your way into the party.