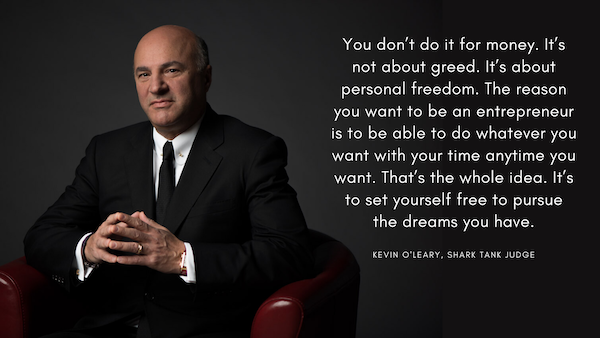 “You don’t do it for money. It’s not about greed. It’s about personal freedom. The reason you want to be an entrepreneur is to be able to do whatever you want with your time anytime you want. That’s the whole idea. It’s to set yourself free to pursue the dreams you have.”

Kevin O’Leary is a top entrepreneur speaker, author, venture capitalist, and guest judge on Shark Tank. In 1986, O’Leary co-founded SoftKey Software Products, and by the late 1990s, SoftKey had acquired numerous competitor companies including Compton’s New Media, The Learning Company, Mindscape and Broderbund. In 1999, the company was sold to the Mattel Toy Company for $3.7 billion, which is one of the largest deals ever done in the consumer software industry.