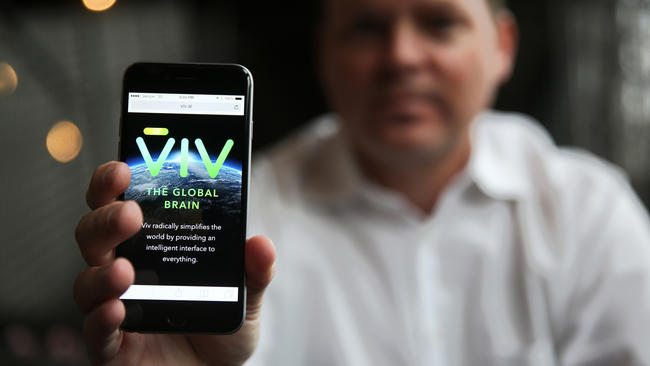 Viv was developed by Adam Cheyer, Dag Kittlaus, and Chris Brigham (Cheyer and Kittlaus just so happen to be the co-founders and creators of Siri).

Cheyer, Kittlaus, and Brigham’s vision is to “radically simplify the world by providing an intelligent interface to everything.” Viv is not like your current smartphone’s interface agent though. Viv integrates third-party programs and vendors to complete tasks associated with entities outside of itself. This means you can order a pizza, send money to a friend, or book a hotel room in one continuous conversation with Viv without ever having to make a call, type a message or open an app. For example, telling Viv to book a hotel room could automatically bring up Hotels.com.

Cheyer foresees that “the next breakthrough technology we will need is multi-step functions”,  which today are being written by human programmers but will soon be written by machines. This new AI technology will “be able to accomplish tasks that would just take too long for a human programmer to try to anticipate them all.” And Viv does just that. Viv is capable of writing its own code to accomplish new tasks. “Instead of having to write every code instruction, you’re really just describing what you want it to do.”

Viv has not yet officially launched or integrated into Samsung smartphones. For the time being Viv Labs will continue to operate independently from Samsung, while sharing intelligence with the company, all with the intent of integrating Viv into an array of Samsung products.

Co-Founder Dag Kittlaus’s sights are set further than just mobile devices. He shares, “It would be essential for Viv to be available across more than just Samsung devices. Our vision requires that Viv be everywhere. Samsung is with us. We share a mutual vision to leapfrog the current state-of-the-art in AI, ushering in a new era.”

That new era is the era of the Internet of Things. All devices will be connected to each other creating smarter cars, smarter homes, smarter refrigerators, smarter everything, leading to a point where no object will be just an object—it will be wirelessly connected to something else.

Viv’s motto says it all, “Intelligence becomes a utility.” Thanks to the team at Viv Labs, the future of AI sure looks bright (or should we say intelligent?).