Hiding from Reality: My Story of Love, Loss & Finding the Courage Within

In this captivating talk, Taylor Armstrong relates the deeply personal story of how she found herself in a relationship of inequality, her struggle with both deep love and fear of her husband, and how she summoned the courage from within to finally leave him. In her ...

In this captivating talk, Taylor Armstrong relates the deeply personal story of how she found herself in a relationship of inequality, her struggle with both deep love and fear of her husband, and how she summoned the courage from within to finally leave him. In her characteristic witty, lighthearted manner, Armstrong also shares illuminating – and even humorous – anecdotes, both about life (good and bad) with her husband, as well as her experiences as a cast member on The Real Housewives of Beverly Hills, where she often found herself battling with friends who struggled to understand the extent of her abuse. Armstrong shares:

This is a must-hear speech for anyone whose life has been touched by domestic abuse, from survivors and family members to support professionals.

Taylor Armstrong starred the hit Bravo reality show The Real Housewives of Beverly Hills. After critical acclaim on debut in 2011, this franchise won a Critic’s Choice Television Award for the success of its inaugural season. The show enjoys a worldwide following, and each week viewers tune in to watch the drama unfold in Beverly Hills.

But Armstrong had her own drama, and behind the glamorous façade of The Real Housewives she hid a dark secret: her husband, Russell, had been abusing her for years in every possible way. Following the familiar pattern of many domestic violence survivors before her, Armstrong had also witnessed domestic violence in her home as a young child – the abuse of her mother at the hands of her father. Thankfully, she was able to break the cycle of violence. After putting up with Russell’s abuse for six years, she found the courage to leave. Tragically, soon after Russell took his own life. Taylor and her young daughter, Kennedy, found themselves starting over while the whole world watched. Armstrong has been interviewed on Dr. Phil, The Today Show, The Ellen DeGeneres Show, Entertainment Tonight, E!, Extra, Access Hollywood, Rachael Ray, Wendy Williams, and Watch What Happens Live, as well as dozens more, including local programs across the country. She has been featured in US Weekly, Life & Style, In Touch, OK!, The Hollywood Reporter, The Wall Street Journal, People magazine,  The Enquirer, and others.

She recently published her first book, Hiding from Reality: My Story of Love, Loss and Finding the Courage Within. This book represents an exclusive personal view of Armstrong’s life and personal experience with domestic violence, which became a New York Times bestseller. A longtime advocate for victims of domestic violence, Taylor has been a volunteer and a spokesperson for the 1736 Family Crisis Center for nearly seven years. She recently founded The Taylor Armstrong Foundation in order to further her mission; the foundation works to raise awareness, educate the public, and help domestic abuse victims recover and continue with their lives.

Thank you so much for speaking at the AVDA event yesterday. Everyone was in tears during your speech and you were really able to communicate what living in an abusive situation is like. For some of the women in the audience, it has been an abstract thing; your talk made it very real for them. Thank you again for coming all this way, we so appreciated it! 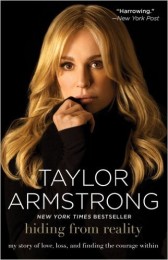