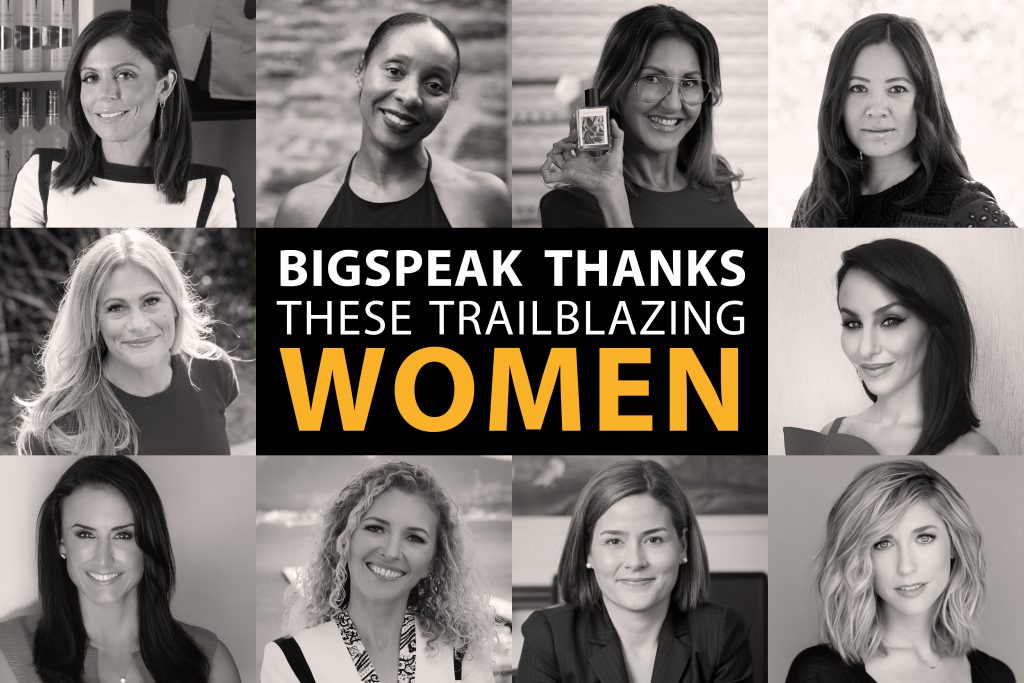 Robyn Benincasa might be the most formidable person we know. Not only is she an adventure-racing world champion and 10-time Ironman racer, but she also serves her community as a San Diego firefighter. On top of that, she is a bestselling author of How Winning Works and considered a thought leader on teamwork and leadership.

After a life of racing, Robyn needed two hip replacements and was told by the doctors she would barely be able to walk, let alone race ever again. Since then, she set two Guinness World Records for various paddling events, started a non-profit, and continues to fight fires.

A true sign of an empowered woman is having the ability to uplift the women around her. Robyn made this her life’s work when she started Project Athena, a non-profit dedicated to helping women overcome setbacks through adventure challenges. CNN named her a CNN Hero for using her own resilience to support other women’s recoveries.

Molly Bloom is yet another audacious woman, as anyone who saw Molly’s Game would agree. Most of you have seen her journey from executive assistant. to running the largest and most elite underground poker game in the nation. The seats at her poker table were filled by A-list actors and professional athletes like Toby Maguire, Leonardo DiCaprio, Ben Affleck, and A-Rod. Molly didn’t just make her way into the boy’s club, she ran it.

She created the most desirable experience on the market for her essentially all-male clientele. And after it was broken up by the feds and everything seemed lost, she turned her life around with her book, movie, and speaking career.

Oh, and all of this came after she almost made the USA Olympic downhill ski team, before an injury took her out.

Barb Stegemann is a socially good entrepreneur who uses her perfume company, The 7 Virtues, to help farmers in war-torn—or environmentally impacted—countries rebuild. She has taken a stand alongside the farmers she works with against the drug trade, extortion of labor, violations of human rights, and even the Taliban. When she saw an injustice, she took on the responsibility of righting it.

Not only is she changing the world with her company, but she also speaks out about the male-dominated health and beauty industry. She encourages women to pursue careers in the field because having men control an industry mostly made for women makes no sense.

Tan Le is one of the greatest minds in technology with one of the most inspiring stories. Tan’s mother raised her and her sister in Australia as refugees after escaping Vietnam on a boat in the middle of the night. Tan believes it was her outsider’s perspective that allowed her to see the world differently enough to create her brainwear technology company Emotiv. Emotiv is a non-intrusive headset that reads brain waves and allows the wearer to control technology with their thoughts alone. Her technology has been used to allow a paraplegic to drive a Formula 1 race car, give a form of communication to a young woman who lost all motor skills after a car accident, provide aid in autism research, and bring Harry Potter’s Hogwarts sorting hat to life.

She has won numerous awards, including being named Young Australian of the Year in 1998, voted one of Australia’s 30 Most Successful Women Under 30, chosen by Fast Company as one of the Most Influential Women in Technology in 2010, and picked by Forbes for 50 Names You Need to Know in 2011.

Bethenny Frankel has transformed her liquor line Skinnygirl into a complete lifestyle brand. When she started off with her alcoholic beverages, she realized she was breaking into a male-dominated industry where most liquors were marketed to men. Although her pitches for Skinnygirl were met with rejection after rejection, she knew the value of her product and pushed forward.

Now Skinnygirl has turned into a lifestyle brand that encompasses alcohol, food, beverages, clothing, and self-help books. She’s earned herself a seat with the Sharks on ABC’s Shark Tank where she makes serious investments with aspiring entrepreneurs and their startups.

Natalie Nixon is where art meets corporate structure. Her background in jazz influences her unique and creative adaptations to organizational change and company growth.

Dr. Natalie Nixon is a strategy, foresight and innovation expert. As president and founder of Figure 8 Thinking, LLC., she advises leaders on unique approaches for process transformation and leveraging creativity as an innovation resource to more rapidly achieve priority business goals. Natalie does this by applying her background in cultural anthropology, fashion, and service design.

Kim Perell is an award-winning entrepreneur, bestselling author, CEO and angel investor with a passion for people, technology, and progress. She went from being laid off at 23 to becoming a multi-millionaire by the time she was 30 years old and selling her last company for $235 million in 2014.

When her digital marketing company was acquired by Amobee in 2008 she worked her way back up to the top and become Amobee’s CEO by 2010. Kim is also an investor in over 70 companies, 14 of which have been successfully acquired by some of the largest Fortune 500 companies including a billion-dollar IPO.

Kim is passionate about women in business and writes, speaks, and is interviewed regularly on leadership, marketing technology, and entrepreneurship. Her achievements as a leader and entrepreneur have been widely recognized and covered in the media, including profiles in The New York Times, CNN Money, and Forbes. Her professional honors include being named Entrepreneur of the Year by Ernst & Young and Entrepreneur of the Year by the National Association for Female Executives.

Dr. Carmen Simon brings neuroscience into the marketing and branding equation. After spending years studying how the brain works, Simon founded Memzy, a branding agency that uses the science of memory to create more effective campaigns.

Carmen has two doctorate degrees, one in instructional technology and another in cognitive psychology, and is a recognized expert in applying neuroscience to leadership, communication design, and customer engagement. Her most recent book, Impossible to Ignore: Creating Memorable Content to Influence Decisions, has been selected as one of the top books on persuasion.

Cynthia Johnson is a global entrepreneur, marketing professional, author and keynote speaker. She is Co-Founder at Bell +Ivy, a marketing and PR firm in Santa Monica, CA, and Las Vegas, NV. Previously, she was Partner & Director of Marketing for RankLab, a digital marketing agency listed in Inc. Magazine‘s Fastest Growing Private Companies in 2015. In July 2015, RankLab was acquired by American Addiction Centers.

She is an Advisory Board Member for The Millennium Alliance, a leading technology, business, and educational advisory firm serving Fortune 1000 C-Level executives. Basically, she’s the marketing guru who transforms companies with her branding expertise.

Cynthia was listed as one of top personal branding experts in 2017 by Entrepreneur, top 50 marketers on SnapChat by Mashable, top 12 Female Entrepreneurs that Inspire by Darling Magazine, and top 20 people in SEO by Guardian. She is a contributing columnist to Entrepreneur and has had work published in Forbes, TIME, and several other industry-specific and top-tier publications.

Lauren Templeton is the founder and president of Templeton & Phillips Capital Management, LLC; a value investing boutique located in Chattanooga, Tennessee. The company is the general partner to the Global Maximum Pessimism Fund.

She is the founder and former president of the Southeastern Hedge Fund Association, Inc. based in Atlanta, Georgia. Templeton currently serves the on the Board of Trustees at the Baylor School, Board of Advisors for The Beacon Center of Tennessee and the Atlas Board of Overseers. Templeton is also an active member of Rotary International.  She serves on the investment committee of Chattanooga Rotary Club 103 and the investment committee of The Rotary Foundation.

In the past, Templeton has served as President of the Atlanta Hedge Fund Roundtable and as the Director of the Galtere Institute: Finance for the Future Initiative at the University of Tennessee at Chattanooga. Additionally, Templeton has been a member of the Board of Directors of the Memorial Hospital Foundation, a member of the Finance Advisory Board of the University of Tennessee Chattanooga, and also served on the Chattanooga Area Chamber of Commerce Board of Directors. Templeton is also the co-author of, Investing the Templeton Way.