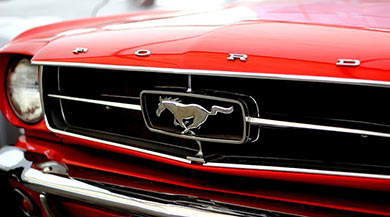 Last week marked the 50th anniversary of the iconic Ford Mustang, originally unveiled at the 1964 New York World’s Fair, which reminded us of the remarkable comeback mounted by the automotive giant and the role BigSpeak played in their restructuring initiative almost a decade ago.

In 2007 (after six quarters of losses and long before the automotive bail-outs) Ford Motor Company approached us to bring in a motivational expert to become the “Speaker of Record” for the first phase of their re-organization efforts.Dr. Willie Jolley was chosen to help Ford become profitable again by implementing an initial employee buyout program. The employees had been reluctant to take advantage of the buyout offer and the Ford executives hoped he could help them reach their goal of reducing the workforce by at least 25,000 employees. For most of October and November of that year, Willie traveled to cities speaking at Ford plants across the country. The buyout offer ended in November and the results were released: As illustrated in the video below, 38,000 people ultimately participated in the buyout (over 50% more than they had hoped for).

As a result of the success of Phase One, Willie was asked to return and be an integral part of Phase Two, which involved developing an Attitude of Excellence among the Ford employees, inspiring and increasing worker productivity, and creating an exceptional customer service experience through speeches, coaching and training. He also taped a series of television spots for the Ford internal television network to be played throughout the plants.

Since that time, the automaker has enjoyed several billion-dollar quarters, re-established brand dominance in its market and achieved profitability without accepting government bail-out assistance.

The long road to Ford’s success was incumbent on many factors, and while we can’t guarantee as dramatic a turnaround for your organization (your mileage may differ), it does serve as a shining example to illustrate the impact of going the extra mile and tapping the expertise, creativity and potential of our speakers beyond the keynote.