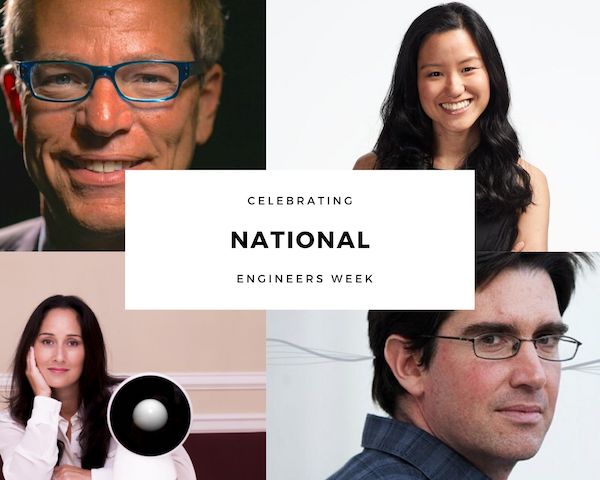 Celebrating the Engineers Changing Our World on National Engineers Week

What would we do without engineers to turn theory into practical applications? We wouldn’t have space travel, robot butlers, and we definitely wouldn’t have Siri to set an alarm for us.

So, during National Engineers Week, BigSpeak would like to shine some light on the impact these engineer keynote speakers have had in our lives and celebrate their incredible accomplishments.

You can thank these two engineers for your personal, voice-activated assistant. Adam Cheyer and Dag Kittlaus created Siri and Viv, the voice assistants for the Apple software and Samsung respectively. Without Adam and Dag, we’d all be our own assistants.

Adam and Dag (above) get most of the glory for the well-known Siri, but none of it would have been possible without Kevin Surace leading the way. Kevin helped pioneer the first smartphone and digital assistant (Mary). The technology he engineered is found in every variation of digital assistant we use.

Yassmin Adbel is a mechanical engineer at heart, although she has branched out into many industries making her even more of a force to be reckoned with. She works on oil and gas rigs, which she has channeled into women’s rights activism speaking out on gender inequality and opportunity. She also heads Youths Without Borders, an organization she started at sixteen to promote youth leadership in collaborative community initiatives.

Cynthia Breazeal is a pioneer in robotics. She has channeled the current robotic knowledge into social robotics and human-robot interactions. She founded and directs Personal Robots Group, a branch of Media Lab that is dedicated to the study and progression of robots in a human world.

Nagin Cox is a spaceship operations engineer for NASA. She uses her extensive knowledge from her work with NASA to speak about unity on a global scale. She believes the mission of space exploration brings the human race together no matter what differences there may be.

You can find John Ellis at the intersection of cars and technology. In addition to writing The Zero Dollar Car: How the Revolution of Big Data Will Change Your Life, he also works as the Global Technologist and Head of Ford Developer Program, where he created the SmartDeviceLink connecting your car with a mobile app.

Marissa Mayer is the former president and CEO of Yahoo. She is a computer science engineer who made her name working for Google on projects like Gmail, Google Maps, Street View, Google Earth, and Google News. From there she took on Yahoo to build it into what it is today.

Marita Cheng is an engineer out to change the world. She founded Robogals, Aipoly, and Aubot. Aubot is the manufacturer for Teleport, a robot that allows patients with long-term illnesses or disabilities the ability to attend school or work remotely.

Samantha Payne co-founded Open Bionics, a company that turns kids with limb differences into bionic superheroes. The company teams up with animation studios like Marvel, Disney, and Lucasfilms to create transformative tools that change lives.