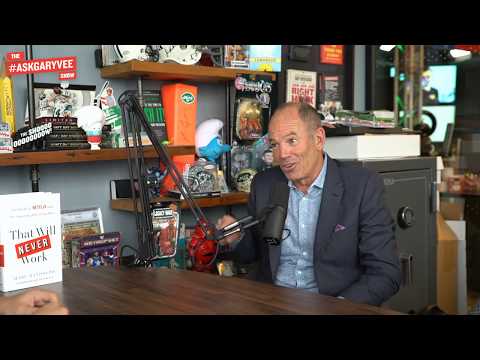 Marc’s first book—which tells the story of Netflix from conception to dominance as an industry behemoth—was released on Sept. 17 and immediately hit #1 for Amazon’s new releases in Communications and Media, as well as #3 in Entrepreneurship, #5 in Small Business, #6 in Startups, and #30 overall for new releases in Business and Investing.


With all the hype, Gary wanted to dig a little further to get untold details about Marc’s story.

When Gary asked Marc what was it about his childhood that made him into the entrepreneurial success that is Netflix, Marc told a story about getting his foot in the door.

Marc grew up in a family that encouraged the wild and the audacious. When he would run to his dad to say he wanted to go cave diving, his dad would respond with, “Woah cool! That’s awesome! How?” From there it was a challenge to figure it out.

The Randolphs weren’t some new-age family who banned the word ‘no’ from their household, but ‘no’ was viewed differently. Weird or crazy requests were never immediately turned down. Instead, they were turned around and posed as questions. It wasn’t up to the parents to tell Marc why things wouldn’t work. It was Marc’s job to figure out how to make things work.

On a similar note, Marc was taught that ‘no’ is just a starting point. Even if his parents told him he wasn’t allowed to do something, buy something, or have something, Marc learned that was where negotiations began.

He could come back with a better explanation, questions as to their reasoning behind the rejection, and justifications to assuage their concerns. The answer didn’t always change, but if he was compelling enough, sometimes it did.

Taking it to the business world

Marc credits one of his early successes in business to his upbringing. When he was finishing up his undergraduate degree, he decided to go for a high-level marketing position at a big firm. This role normally went to someone with an MBA and he knew his chances were slim.

But he didn’t stop there. Just like his parents taught him, he reached out, writing letters to everyone he interviewed with asking what he could’ve done better, why there was a no, what part of him was causing the doubt. The next day he got a call asking him to come in; they had reconsidered and wanted to offer him the job. When he got there, they told him all four applicants had received the same rejection. Since the role required turning a no into a yes, they put their candidates to the ultimate test. And Marc was the only one that passed.

For more inspirational stories with tangible takeaways, check out Marc’s book That Will Never Work: The Birth of Netflix and The Amazing Life of an Idea.