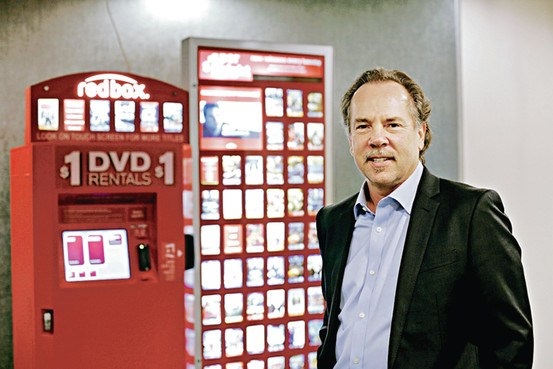 Perhaps you’re familiar with the founding story of Netflix? The story goes that co-founder Reed Hastings came up with the idea for Netflix when he got hit with a $40 late fee on his Apollo 13 Blockbuster rental.

For instance, the story doesn’t include the significant contributions of Netflix’s co-founder Marc Randolph, or other founding executives like Mitch Lowe and Patty McCord.

While company founding stories are often just that—stories that encapsulate the mission and purpose of an organization into short digestible bites—we spoke with founding executive Mitch Lowe to learn more about his involvement with Netflix in the early days, and his extensive background in the video rental industry.

Here’s what happened in the early days of the now iconic video streaming site, when Mitch Lowe met Reed Hastings and Marc Randolph.

It all started in 1997 when Marc Randolph visited the Video Software Dealers Association (VSDA) Convention in Las Vegas and stopped by Mitch Lowe’s booth. Mitch had created a video website company called NSI with one of the co-founders of Autodesk. Their primary service was a subscription-based, menu-driven website builder for video rental chains, and he was exhibiting that service at the VSDA convention.

At this time, Netflix was just an idea to rent DVDs through the mail and not the video subscription service giant we know today. Marc and Reed were looking for someone who knew the video rental industry to help them get their mail idea off the ground.

That’s when the pair connected with Mitch who, at the time, already had more than fifteen years of experience in the video rental industry and at the time was the Chairman of the Trade Association. Over the late summer of 1997, the trio started formulating their plans to turn their idea into a company. Mitch explains:

Netflix was born from the idea that a DVD weighed less than an ounce, so they could be mailed using first class post and arrive in a day. The problem we were solving initially was the generally limited selection at local DVD rental stores and lack of locations to rent the long-tail content. The company in Mitch’s view initially was to be everything DVD; we sold movies below cost and rented every title we could get our hands on. Eventually in 1999 after struggling to have a service consumers would love they came up with the all-you-can-eat concept and the rest was history.

Initially, Mitch’s role at Netflix was to educate the Netflix team on the nuances of the video rental industry, the video consumer, the studios, etc. He was also the first buyer of content. Marc Randolph verifies: “Mitch joined us before we were Netflix. He was a part of the founding team at Netflix, and a vital part of our successes.”

Once the startup was up and running, Mitch’s role grew. He served as Netflix’s first Vice President of Business Development & Strategic Alliances. As Vice President, he focused on strategic deals that would deliver large pools of subscribers such as integration into Best Buy’s point of sale system, inserting coupons and Netflix offers inside DVD Player boxes, and a stealth project. “My last year,” Mitch says, “I launched a stealth project called Netflix Express which was a vending machine method of closing the last-mile delivery of our subscriber’s DVDs.”

Mitch stayed on at Netflix from 1997 until 2003, before moving on to success with other video rental companies.

Before he met Reed and Marc at the VDSA convention Mitch had been working in the video rental industry for over 15 years and had lots of revolutionary ideas.

In 1982, when the video rental was just getting started, an opportunity came along. When Mitch learned that the local video store needed money to grow, he loaned them $20,000 in exchange for free rentals. A year later when the store could not repay the loan he took the videos in exchange and opened up his own video rental business.

During this time he began designing and building one of the first movie rental kiosks, similar to Redbox, and called it Video Droid. At the time, it wasn’t a big hit, as Mitch explains:

I devised an interactive touch screen monitor where the customers could see trailers, read reviews, see clips from entertainment news then pick their film and have it dispensed from a machine…I went to Japan to manufacture the machine and built the first prototype in 1984. When consumers saw The Droid they thought, ‘Wow, very cool, but there is a great big video store around the corner.’ No one rented from the kiosk.

In 2003, Mitch got a second chance with the video rental kiosk idea when he joined RedBox as COO and later as President. During his time at Redbox, he was able to assemble an amazing team of executives and grow Redbox from 6 kiosks to over 35,000, bringing in $1.5 billion in revenue in final year leading Redbox.

Mitch cites his success from “having learned about company culture from Reed Hastings and Patty McCord, and marketing and product innovation from Marc Randolph.”

Mitch now plans to continue to influence the movie industry in his newest venture: Moviepass. In June of 2016, Mitch joined the company as CEO. Moviepass is a movie theater subscription-based service that could be described as “Netflix for the movie theaters.” Mitch explains that so far MoviePass has “seen the same impact that subscription services had at Netflix—causing customers to explore content they would not have seen in an a-la-carte purchase model and a dramatic twofold increase in the frequency of going to the movies.”