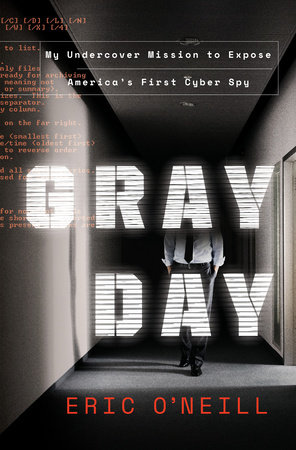 In Gray Day: Eric O’Neill Goes One on One With America’s Most Notorious Spy

Spies were disappearing in 1985. Lots of them. While the FBI arrested eight moles in the U.S. government, the KGB eliminated eleven Soviet double agents who were giving away Russian secrets to the West. A few double agents got prison; most got a quick bullet and a cold grave.

On the surface, this might seem like the usual tit for tat in terms of espionage. But between 1985 and 1991, the Soviets kept winning the Where’s Waldo of counterintelligence. Soviet assets helping the US kept disappearing without warning. The Soviet agencies were good—but not that good. This type of winning streak could only be the result of inside information. The U.S. had a mole who was tipping off the Soviets. All the U.S. moves were being telegraphed.

The FBI was sure the mole was in the CIA. The CIA was convinced the FBI had sprung a leak. Then they put rivalries aside, formed a joint committee, and decided the traitor was in the CIA. They were wrong. After a tip-off from a Soviet defector in 2000, they finally realized the mole might be in the FBI. The evidence pointed to senior FBI agent Robert Hanssen.

Enter Eric O’Neill, the hero of the new book on the Robert Hanssen spy case, Gray Day. The story was already made into a Hollywood film Breach—starring Ryan Phillipe as Eric O’Neill and Chris Cooper as Robert Hanssen—and told in several books, but this is the first time we get the insider’s account of how O’Neill was recruited to help take down Robert Hanssen.

At the time, O’Neill was 27 and on the outside looking in on the FBI. After working five years as an FBI investigative specialist, he found himself relegated to the sidelines for marrying Julianna, a foreign national, born in East Germany. Despite the fact Germany had been reunified for more than a decade, US counterintelligence agencies were still suspicious of the motives of people from and associated with East Germany. While the FBI investigated his in-laws, O’Neill’s security clearance was suspended and he was placed to work on a computer database.

Then one cold, Sunday morning in Dec. 2000, O’Neill’s phone rang. His boss was outside in the car and wanted to talk to him. He asked O’Neill if he had heard of Robert Hanssen. When O’Neill admitted he had not heard of Hanssen, he was asked to spy on the man. His cover would be a new assignment. O’Neill would be placed in a new computer unit and work with Hanssen one on one, tasked with building up a relationship and getting dirt that would indicate that Hanssen was Gray Day, the traitor.

So begins the tense tale of the case built to capture the U.S.’s most notorious spy. O’Neill recounts how he was tasked with finding incriminating information that would link Hanssen to his spying activities while trying to maintain the appearance of a normal life. He was unable to talk to his wife or anyone else but his FBI contact about the case. As his marriage breaks down and his law school grades suffer, he tries to maintain his wits so he doesn’t make any mistakes that will tip off Hanssen.

We all know the case ends with the successful arrest of Hanssen, but the journey there is one tense tale. Well written in the first person, the book reads like a true-life John Grisham thriller that should have had a movie version starring Tom Cruise. Even if you thought you knew everything about the case, O’Neill’s personal point of view shows the personal stakes agents take every day when working undercover.