Eric O’Neill is a top cybersecurity keynote speaker, former FBI counterterrorism and counterintelligence operative, bestselling author of Gray Day, and the inspiration for the film Breach. Eric is also the founder of The Georgetown Group, a premier investigative and security services firm, and a National Security Strategist for Carbon Black, the leader in next-generation endpoint security.

Eric O’Neill’s keynotes inspire and entertain through storytelling that makes his audience think about pressing security issues and the future of technology.  Eric helped capture the most notorious spy in American History. His story was made into Universal Studio’s feature film BREACH. Since his time as an undercover FBI Ghost, Eric has practiced law, started companies and is an international thought leader on security and cyber-security.

Cybersecurity During the Pandemic

The FBI’s Internet Crime Complaint Center (IC3) just revealed that cyberattack reports have quadrupled during the pandemic and that foreign spies are targeting COVID-19 research and the healthcare sector.   The US Department of ...

The COVID-19 pandemic has created a perfect storm for cyberattacks. Millions of people are working from home, are distance learning and are engaging friends, family, clients and colleagues over unfamiliar and often unsecure platforms. Everyone is eager for information about the virus that has radically changed our
lives. Criminals and spies have exploited the chaos surrounding the pandemic to steal our data, hijack our meetings, compromise our accounts, steal our finances and commit unprecedented levels of fraud. As the world has moved fully online, spies have sharpened their daggers and are feasting on the chaos.

Gray Day: How I Caught the Most Damaging Spy in American History

Imagine if the FBI locked you in a room for eight hours a day with the most ruthless and damaging spy in United States history. Imagine feeling unqualified and outgunned, knowing the country depends on you to succeed despite the fact no one has provided the means to do so. ...

Imagine if the FBI locked you in a room for eight hours a day with the most ruthless and damaging spy in United States history. Imagine feeling unqualified and outgunned, knowing the country depends on you to succeed despite the fact no one has provided the means to do so. Robert Hanssen was a notorious cyber spy charged with selling American secrets to Russia for more than US$1.4 million in cash and diamonds. His ability to exploit computer systems allowed him to protect his identity during a 22-year spy career. In this edge-of-the-seat spy thriller talk, Eric O’Neill shares intricate details of the investigation and shows how you can find success inside yourself by setting small goals that lead to big accomplishments until finally, through courage, confidence, and determination, victory is achieved.

Cybersecurity in the Age of Espionage: How to Keep Your Valuable Data Safe

Experts predict that the cyber theft of private and confidential information from government agencies, businesses, and private individuals will reach $6 trillion annually by 2021. The modern spy is responsible for these sophisticated, brilliant, devious, and technologically ...

Experts predict that the cyber theft of private and confidential information from government agencies, businesses, and private individuals will reach $6 trillion annually by 2021. The modern spy is responsible for these sophisticated, brilliant, devious, and technologically advanced attacks targeting your data.

Ransomware is not only the most damaging and costly cybercrime, it is a go-to tool for spies, terrorists, and attackers. Over the last three years, ransomware attacks increased 2,500 percent and security experts predict that this economic boom industry will cost $11.5 million by 2019.

In the information age, your company’s most precious asset is data. How can you keep it secure? In this lively and informative talk, cyber-security expert, author, and spy hunter Eric O’Neill uses true stories informed by decades of work as an undercover operative in the FBI and security consultant to help you protect your information.

Eric O’Neill is a cybersecurity keynote speaker, former FBI counterterrorism and counterintelligence operative, bestselling author of Gray Day, and the inspiration for the film Breach. Eric helped capture the most notorious spy in United States history, Robert Phillip Hanssen. Eric is also the founder of The Georgetown Group, a premier investigative and security services firm, and a National Security Strategist for Carbon Black, the leader in next-generation endpoint security.

Eric O’Neill helped capture the most notorious spy in United States history: Robert Hanssen, a 25-year veteran of the FBI. The remarkable true events of his life are the inspiration behind the critically acclaimed dramatic thriller Breach, starring Ryan Philippe as O’Neill, and his bestselling novel Gray Day. The film set inside the FBI- the gatekeeper of the nation’s most sensitive and potentially volatile secrets – is the story of the greatest security breach in US history.

Preceding Hanssen’s arrest, O’Neill worked with the spy within the information assurance division that protected all classified FBI intelligence. O’Neill gained Hanssen’s trust and used that relationship to slowly draw the traitor out of deep cover.

O’Neill began his career in the FBI as a graduate of the FBI’s Intelligence Program. He spent the first five years of his career as a special surveillance group field operative tasked to surveil and monitor foreign, national, and domestic terrorists and spies. He transitioned from field operative to direct undercover work focusing on Hanssen. Although his prior training had focused on “ghosting” targets from the shadows, he engaged his target in conversation in order to elicit information needed to catch Hanssen in the act of espionage. The singular nature of the assignment, one with little backup or support, required O’Neill to draw from deep reserves of courage and confidence within himself to battle Hanssen’s mind games and aggressive probing and learn to “stop reacting to Hanssen and begin acting.”

Currently, Eric O’Neill is the National Security Strategist for VMWare-Carbon Black, the leader in next-generation endpoint protection, where he provides insight and advice on strategic cyber-security issues and will work to ensure VMWare-Carbon Black is an active participant in the conversation about the national strategy for cybersecurity. He is also a founding partner of The Georgetown Group, a premier investigative and security consultancy, where he specializes in counterintelligence operations, investigations into economic espionage, cybersecurity penetrations, internal investigations, catching the trusted insider and security risk assessment consulting out of Washington, DC.

O’Neill’s story is one of patriotism, of decisive action in the face of fear, and of learning to maintain confidence in ability even if it looks like success is impossible. He has told his story in national media, in print, on radio, and on television including 20/20, Nightline, Hardball with Chris Mathews, Fox News Power Player of the Week with Chris Wallace, CNN, CSPAN’s Washington Journal, NPR’s “Fresh Air with Terry Gross,” World News Now, MTV, and Access Hollywood.

A talented motivational speaker who weaves real-life experiences into a presentation that is both entertaining and rewarding, Eric O’Neill provides practical insights into real work situations relevant to many industries. In addition to his experience in the Hanssen case, he also addresses the issues of confidence and patriotism, the threat to United States security posed by terrorism, foreign intelligence services, the cyber threat to our national infrastructure and the national conscience in a monitored society.

“Eric goes out of this way to ensure his talk is aligned with your event goals, theme, and audience makeup. He asked the right questions in our pre-event brief, and customized his content to meet our needs. The feedback we received from our attendees was outstanding and we look forward to working with Eric again in the future.”

Eric was a wonderful addition to our Company-wide Conference and, for many of our attendees, his presentation was the highlight. He was engaging, animated, charming and able to extract important business lessons from his experience with the FBI. I appreciated his candor, the tailoring of his message to our theme and the time he took to spend with our team. I’d recommend him as a speaker at any corporate event.

Eric O’Neill is an enthralling speaker who brings to life the realities of espionage and what it means to the average business. He painted a picture that was both enticing and terrifying based upon his experience at the FBI

Eric is a consummate professional, with a relaxed demeanor, he was the absolute hit of our event!  We had a record attendance at our meeting, and due to his great presentation we have new exposure for our ISACA chapter!

Eric O’Neill’s presentation on “An Insider’s Look into the Robert Hanssen Investigation: How the FBI Caught the Worst Spy in American History” is a breathtaking insight into one of the worst spies in United States history. Eric presented on never before heard facts that wowed the audience and left everyone wanting more. His professional approach and mild-mannered attitude were spot on for an engaging delivery. Everyone was so focused on Eric for the full hour that you could have heard a pin drop in a room of 1,000+ attendees.  Eric is truly a once in a lifetime speaker that everyone should see and hear in person!”

Mr. O’Neill’s presentation was very engaging.  He was able to translate his experiences into a thought-provoking presentation on risk management covering the investigation methods used and professional/life lessons learned with insight and humor.

Eric does an incredible job engaging an audience through the telling of espionage stories, while masterfully weaving in what it means today in the world of cybercrime. He captivated the attention of over 350 business leaders, who left with clear insight into the non-negotiable importance of strategic cyber-security.

“Eric was the perfect guest speaker for our event. With an audience of IT Security folks, he not only captivated the room with his thrilling espionage story, but also incorporated our latest cyber-security report and other cyber-security themes into his talk. Eric has a long list of interesting topics he can speak on, and we hope that we can bring him back to speak again in the future.”

Eric O’Neill spoke at our Qualcomm conference and our group was very pleased. He hit home with the importance of being diligent to protect personal and company data – with many examples of ways we are all being targeted. The threat is REAL, and people need to take it seriously.

I want to tell you how fabulous Eric was. I was personally so impressed with his keynote address and his delivery style.  He is a fantastic story teller. I was also fortunate enough to meet him as well.  An incredibly intelligent and thoughtful individual. The feedback we’ve gotten thus far has been overwhelmingly positive.  We’ve had multiple attendees comment that he was by far our best keynote address to date.  We are so grateful to him for his participation. 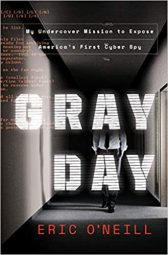 Today is the 20th anniversary of the arrest of the most notorious spy in American History: Robert Hanssen. BigSpeak Exclusive...

Former FBI Agent Eric O’Neill on Cybersecurity During a Pandemic

Cybersecurity risks are at an all-time high. Historically, cyber terrorists and hackers have taken advantage of national and world crises,...

If you had information about tomorrow, would you be able to work better today? Of course, you would. But who...

With technology playing an increasingly large role in the way we do business, and the way we go about our...

Cybersecurity Expert Eric O’Neill achieved his first bestseller on Amazon with his new book Gray Day. After just one week of...

In a recent Public Radio International broadcast, Eric O’Neill said Paul Whelan doesn’t meet the profile of a US spy....

In Gray Day: Eric O’Neill Goes One on One With America’s Most Notorious Spy

Spies were disappearing in 1985. Lots of them. While the FBI arrested eight moles in the U.S. government, the KGB...

Cybersecurity is a shifting, rapidly changing landscape flush with obscure jargon, archaic principles, and a misunderstanding of how attacks occur....

Cybersecurity has taken center stage, with Ashley Madison, Anthem, and the IRS all taking hits and making headlines. BigSpeak’s Eric...