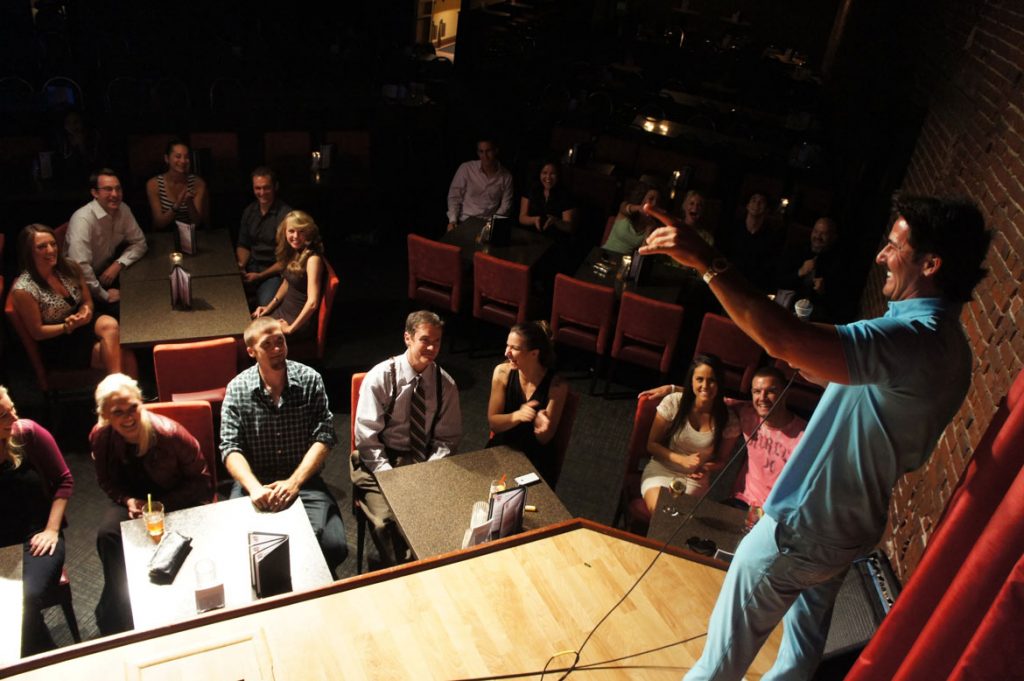 By analyzing the habits of stand-up comics, you can view the act of speaking with a fresh perspective—and captivate your audience in a whole new way.

Here are five habits of stand-up comics that you should embed into your own performances for exciting speeches.

While playing the character George Costanza on Seinfeld, Jason Alexander sent audiences howling with his neurotic regurgitation of events. The humor was in the delivery of the narrative, not the ending.

As George Costanza shows, a comedian’s storytelling abilities are even more important than the punchline.??As a public speaker, your mission is to convey information to your audience, not necessarily to spark laughter. Still, you can mask that information in the form of a tale told through your unique perspective.

Just as George Costanza described his day in an idiosyncratic way, trace how you came to understand the content described in the speech. Your audience will follow the course with curiosity and connect with you better for it.

2. Get to know your audience—literally

By engaging in friendly rapport and humorous jabs, stand-up comedians connect with their audiences. Milton Berle, the king of one-liners, took this a step further. He began each stand-up routine by asking whether the audience wanted to hear plays on words, political jabs, or topical humor. The crowd’s responses swayed the rest of the set.

Taking a cue from Berle, public speakers can begin their speeches with a series of probing questions to involve the audience. Engagement can also occur on a one-on-one basis before the speech begins—speak to one or two audience members before going onstage.

3. Roll with the punches

For the stand-up comic, each new set is an opportunity to learn. Improvising while they go, comedians often ditch jokes mid-set, speed up delivery if they detect restlessness, or engage directly through rapport.

In the same way, public speaking is a two-way listening exercise. While it would be simple to deliver information just as you’d rehearsed, adjusting to live feedback is paramount. Remember, you may be the driver, but you aren’t the only one in the car.

4. Get comfortable with failure

Aside from extreme athletes, no one’s more acquainted with wipeouts than comics. For the stand-up comedian, failure is a necessary building block for success. Each fumbled set and failed joke pave a stepping stone for improvement.

Accepting that some material will inevitably bomb, comedians take failure with a grain of salt. One element of performance is acknowledging the factors outside of your control. Even if you prepare adequately and do your best, your delivery may still come up short. That’s okay. Don’t let fear of failure prevent you from trying in the first place.

Louis CK has made a career of discussing his discomfort with the world; yet when he’s on the stage, the comedian is calm, cool, and collected. Successful stand-up comics don’t just perform their material. They perform themselves. ??In any form, public speaking is an act of performance.

When you get onstage, play the part of a confident speaker. Projecting an air of confidence is far more important than actually feeling comfortable on stage. ??You don’t have to be a natural-born comic to learn from the greats. In addition to having a stand-up comedy YouTube marathon, check out some comedians who have also mastered the art of public speaking in other arenas as well.

Ken Sterling is the Executive Vice President at BigSpeak. He holds a Ph.D. from the University of California and an MBA from Babson College. Ken teaches Entrepreneurship, Marketing, and Strategy at UC Santa Barbara. He is a serial entrepreneur, keynote speaker, business consultant, and sales & marketing expert.

This article was originally published on YFS Magazine