Al Comeaux is a master storyteller who expertly weaves together scientific research, thought-provoking ideas, and practical takeaways into an unforgettable message for audiences of all backgrounds and sizes. Al is ready to make an immediate impact on your organization and leaders today.

The 4 Ways to Win the Change

Given the estimated $3 trillion spent – and $2 trillion wasted – on organizational change efforts each year, how can leaders think about change differently? What do leaders at companies that win at change do vs the unsuccessful ones? In this signature keynote, Al finally ...

Given the estimated $3 trillion spent – and $2 trillion wasted – on organizational change efforts each year, how can leaders think about change differently? What do leaders at companies that win at change do vs the unsuccessful ones? In this signature keynote, Al finally brings an insider’s view, sharing how winning companies don’t try to get their people to change…they get their people to want to change. From getting our own hands dirty as leaders, to pulling our people through the change, and understanding the invaluable role that listening and modeling play, Al lays out how leaders can win their change efforts. Drawing on his vast experience of living, leading, and researching change from the inside during a 30+ year career as an executive at disruptive companies like Travelocity and large, established companies like GE and American Airlines, and through scientific research and storytelling, Al weaves together a compelling and practical case for a new way of looking at organizational change that is sure to reset leaders’ mindsets about change and set them up for success.

Leading Change During an Inflection Point

Global forces and technology are both driving the need for change in our organizations…and the need for change only becomes greater, faster with each new technology, each global macrotrend or event. We see it in how we and our people work each day, how we communicate with each other, and so many other ways. So, how do we change our organizations to keep up with these forces and the demands they drive? How do we take advantage of these events, macrotrends and technologies without losing our people—the very ingredient we need to be successful in these times. In this keynote, Al brings to life the formula for successful change: The irony that leaders must focus on inputs, not outcomes, in order to achieve the desired outcomes. The need for leaders to walk-the-change-talk. The need for leaders to listen to their people, whose ideas are likely to be more robust, and more grounded in reality. Using science, great stories and examples from his three decades in corporate life, plus his twenty-year journey studying change, Al shares a formula for successful change that will endure today and prepare any organization for change demands that can’t yet be foreseen.

How do we as leaders get our people to drive fundamentally better business results than our competitors’ people? There is no silver bullet: Doing it requires us to pull many levers to affect the brain’s rational and emotional processors. We’re great at developing ...

How do we as leaders get our people to drive fundamentally better business results than our competitors’ people? There is no silver bullet: Doing it requires us to pull many levers to affect the brain’s rational and emotional processors. We’re great at developing rational explanations for things, but neuroscience makes clear that emotion plays just as big a role. In this keynote, Al brings his 30 years in-seat as an executive at renown companies such as GE, Travelocity and American Airlines, to reach fellow executives on a different level and teach them how to appeal to our people’s hearts to drive better results. With stories that touch the brain and the heart, and with research from management, neuroscience, and social science, Al explains the importance of heart and the principles we must live and work by if we want motivated people who will consistently outperform.

Executives tend to focus on tactical excellence during change. Project management. Finance-related decisions. Technology choices. These things are important. But most change efforts fail. In this ...

Executives tend to focus on tactical excellence during change. Project management. Finance-related decisions. Technology choices. These things are important. But most change efforts fail. In this engaging keynote, Al brings his 30+ years in-seat as a corporate executive at noted companies such as American Airlines, GE and Travelocity, plus more than two decades researching successful and unsuccessful change initiatives to put our focus as executives on the one thing he’s found will beat us at change: our people. If our people don’t change, our organization doesn’t change. And our people don’t have to change. With that in mind, Al breaks out five different types of people and how we have to think about them during change. And he explains how the most important work we do is before we execute, by getting our people primed for the change. Because—as he’s seen from living, leading, and researching change—all the king’s project management and all the king’s technology prowess won’t buy us much if our people don’t want to change.

Al Comeaux is a global authority on change from the inside-out, having lived, led and researched change from inside organizations large and small, disruptive and established, across numerous industries and countries. He’s held senior leadership positions championing vast strategic changes, including an IPO, reaction to a hostile takeover, a take-private/leveraged buyout, digital transformations, two startups inside large corporations, massive globalization, two 40 percent layoffs, as well as three CEO transitions, countless other executive transitions, four nationwide strikes, and too many other changes to count.

After helping lead a terribly unsuccessful change effort in the late 90s, he set out to understand why some organizations’ change efforts succeed, while most fail. This research and in-house experience make him one of the world’s most forward thinkers on what leaders must do—and how they must think—to succeed at change. Now, after this 20-year journey, he’s developed Primed for Change, a disruptive new project created to prepare leaders to steer their organizations successfully through change.

Perhaps his most salient change-oriented role was at the uber-disruptive startup Travelocity. Al joined Travelocity and its leadership team in 2000, just after the crash of the dot-com bubble, when the public—including employees—began to question whether e-commerce would even survive. Through his time there, he supported phenomenal company growth: Travelocity grew from the 33,000th largest US travel agency to the 5th largest in just five years. As a VP at Travelocity, he became a cultural crusader and successfully championed the company’s Customer Service Guarantee, a product and service initiative that drove tremendous technical and process change across the company. He also re-shaped Travelocity’s public image from its technology focus to one of travel expert.

Amid rapid globalization—with Sabre’s employee population going from 85 percent US employees to 45 percent US-based in just three years—he partnered with technology innovators there to launch what’s believed to be the first-ever internal social network; SabreTown created business and social connections across the organization, lowering costs and shrinking the organization even as it grew. Al also helped maintain cultural balance at Sabre during a change in its ownership—from a publicly traded company to a private equity leveraged buyout.

In 2010 Al joined GE Aviation, where he brought crowdsourcing and other digital capabilities to this $20 billion industrial business and helped launch its purpose: “We invent the future of flight, lift people up and bring them home safely.” Known for strong “imagination and courage,” he later helped GE create its Distributed Power business, a startup that combined three existing units and their people across multiple industry verticals and continents.

Al started his career with five years in Washington, DC, where he was a Congressional staffer and consultant. But his professional journey truly ‘took off’ at American Airlines, where he managed internal and external labor communications and helped launch groundbreaking capabilities such as online travel, new airport technology, ticketless travel, as well as the oneworld global airline alliance. Later as a senior leader at American’s European division, he led communications during a strategic change program across nine countries.

After briefly serving as chief communications officer at financial services startup Elevate during its IPO, Al finally took the time to put his 20 years of change research to good use. In 2019, Al founded Primed for Change, a disruptive new project that helps prepare leaders to shepherd their organizations successfully through change. In 2020, Al released his debut book, Change (the) Management: Why We as Leaders Must Change for the Change to Last, which draws on his decades of experience in-seat as a change champion and senior executive, as well as his years of research on the subject of organizational change. With well-told stories that illustrate the need for this fundamentally new way of thinking, this book finally speaks straight to senior executives who need to re-think how they manage change…and even how they lead every day.

Al and his wife Katie have two daughters and live in Ft. Worth, TX, where he is deeply involved in his family, faith, and community. 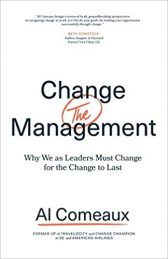