When Creativity Isn't Enough: On Dangerous Ideas and the Challenges Of Competence

Stop me if you’ve heard this one: “Creativity is incredibly important for…” Oh, you have? Color me surprised. Not. Everyone and their CEO are talking about the importance of creativity in business, how this represents a key ...

Stop me if you’ve heard this one: “Creativity is incredibly important for…” Oh, you have? Color me surprised. Not. Everyone and their CEO are talking about the importance of creativity in business, how this represents a key competitive advantage in the fast-moving contemporary business environment, and how creative people are your most valuable resource. Still, amidst this boosterism, questions remain. Why, when everyone swears by it, is creativity still so rare in our organizations? Why, when everyone says they believe in creativity, do ideas still have such a tough time in the corporate world?

In a provocative keynote, professor Alf Rehn argues that what we call “creativity” has in fact become a pale imitation of the same, a tale where we talk of challenges but seek camouflaged comfort. As an antidote, professor Rehn proposes that companies explore “dangerous thinking”, focusing on ideas that break with deeply held values in the organization, ideas that seem improper, childish, even disgusting. By exploring such matters, which may well go against the existing competencies and professional identities of the corporation, we can find tremendous opportunities where others fear to look. Remember, calling it “creative” doesn’t make it so, and true disruption always comes as a shock to the system – and the system is you.

The Innovation Crisis – And What We Can Do About It

Despite what media and pundits would like to tell you, the world is not in the midst of a golden age of innovation. On the contrary, what we’re experiencing may well be a deep innovation crisis, one where more and more talk about innovation and ...

Leadership Outside of the Comfort Zone

If you want an innovative company, one prepared to do things differently and build the future rather than being surprised by the same, it isn’t enough to merely state that innovation is an important value in your company. Instead, you need to ...

If you want an innovative company, one prepared to do things differently and build the future rather than being surprised by the same, it isn’t enough to merely state that innovation is an important value in your company. Instead, you need to take your leadership style out of the comfort zone of control, and start leading for surprises, strangeness and serendipity. Leadership in an age of volatility, uncertainty, complexity and ambiguity cannot remain the same as it has been, but what are the leadership principles for an age in which everything is being disrupted?

In this keynote, professor Alf Rehn presents a take on leadership that focuses on the need to harness disruptive creativity, the kind that doesn’t easily fit in with departmental meetings and endless reviews. By doing so, Alf encourages his audiences to consider the ways in which outmoded forms of leadership can stifle and organization, and why we need to discuss more heterodox forms of leadership for an increasingly complicated world – including taking a cue from fields and inspiration not usually explored in traditional leadership research.

Consequently, Alf takes on matters such as the leadership lessons of illegal enterprises, the manner in which the great chefs create the world’s most creative teams, and the skills needed to manage anarchy. Leadership outside of the comfort zone doesn’t just require courage of leaders, it also requires that followers are ready to depend on a new, often more demanding kind of leadership – one not afraid to ask the uncomfortable questions and seeking out challenging alternatives.

Trickster Strategy: The Art and Science of Non-Obvious Business Success

Strategy used to be easy. Capture a market position, defend it, profit. Unfortunately fewer and fewer companies today find this to be anything like a sure-fire road to success. A radically more fluid global economy has forced companies to rethink ...

Strategy used to be easy. Capture a market position, defend it, profit. Unfortunately fewer and fewer companies today find this to be anything like a sure-fire road to success. A radically more fluid global economy has forced companies to rethink strategic management in ways we previously considered ridiculous. But when the going gets strange, strategy needs to, too…

A trickster is someone who challenges conventional behavior and who explores far beyond the borders of what is considered “proper” in a society. By playing tricks and utilizing paradoxes, a trickster extends what we thought possible, even in the face of societal snubs. In our modern world, the strategist needs to become a trickster rather than a planner, someone who questions and challenges rather than one who lives up to the images made by others.

Professor Alf Rehn explores the manner in which contemporary tricksters can find tremendous business success in fields others see as patently worthless or unsuitable – including in his examples companies that spun gold out of creating terrible products, successful firms that abandoned “must-have” technologies, and organizations that made bad taste their recipe for success. By doing so, Alf wants to help companies think about what strategy truly means to them: A series of pretty words, designed by consultants for media consumption, or something more meaningful?

Trickster strategy is what happens when we move away from doing what we’re supposed to, towards doing what others cannot imagine. Being a trickster is difficult, but inherently valuable – and nobody said that strategy was supposed to be easy.

If futurists are all about seeing alternative futures, why do they all sound alike? Why does everyone talk about the same technological developments, the same social changes, the same megatrends? Simply put, they do so for the same reasons companies ...

If futurists are all about seeing alternative futures, why do they all sound alike? Why does everyone talk about the same technological developments, the same social changes, the same megatrends? Simply put, they do so for the same reasons companies do – because it is easier and less risky to talk of the futures that have already become legitimized. The problem? These futures exaggerate the opportunities in the same (as everyone else is exploring them too) and turn a blind eye towards the risks in accepting a pre-packaged, generally accepted future.

The reason for this, and the problem Alf wants to solve, is that much of futures thinking prefers to present the already accepted and the already legitimized, and are thus not helping companies to think differently about the future. We often prefer futures that compliment us and our contemporary knowledge, and thus many consultants are more than happy to sell us a fantasy about the future, one that feels manageable and in which we and our company are still as important as ever – in other words, futures that challenge us little if at all.

In this keynote, professor Alf Rehn discusses the problems of such cookie-cutter futurism, and presents a take on futures thinking that focuses on and encourages the taboo, the unthinkable and the horrifying – all in order to be prepared, the shocker rather than the shocked. By going through the various biases and errors of thinking that make us believe that the future is already given, Alf gives his audiences the tools to craft futures rather than repeating clichés about the same, ways to think about that which others can’t see rather than more of the currently popular buzzwords.

Alf Rehn’s Key Accomplishments Include . . .
Professor Alf Rehn is an accomplished academic who was awarded a chair in management and organization at the age of 31, an internationally active strategic advisor, renowned speaker, bestselling author and unabashed pop-culture geek. As a thought leader, he is a contrarian and provocative expert in creativity, innovation, strategy, trend spotting and taboo futures, who has challenged and delighted audiences all over the globe. In addition, he sits on corporate boards ranging from those of billion dollar companies to an advertising agency and early-stage startups.

As a business thinker, he has been called an “enfant terrible of organization studies”, while the venerable Times called him a “star of the future”. The 2011 Thinkers 50, included him on their “Guru Radar”, ranking him #13 among up and coming business thinkers. In the Finnish Thinkers 20-list, he was rated the #3 business thinker in Finland (#1 among academics). He is also listed internationally as a “Top Professor on Twitter.”

Alf’s main interest isn’t to just state that innovation, or strategy, or creativity, or any of the other usual suspects is important. Instead, he is focused on why we still struggle with all these, even though we spend so much time and resources chasing for the same. By turning many of the assumptions of innovation inside-out, Alf Rehn has helped companies all over the world to go beyond generic talk about “thinking differently”, and instead finding opportunities by exploring beyond their comfort zones. This requires looking critically at what we believe creativity is, why we think innovation is important, what leadership means in an age of relentless talk about the same, and being prepared to question even those things that are most dear to us. As a thought leader and provocateur, Alf has done this on a regular basis, with companies ranging from bleeding-edge startups to transnational corporations – all to rave reviews.

Alf frequently works as a speaker at various events, ranging from keynoting major conferences or events for global corporations, to giving interactive sessions and workshops for smaller groups.
He was voted “Speaker of the Year” in Finland in 2010, and has gotten top marks and rave reviews at conferences around the world. Some claim it’s the jokes. Others, that it’s the take-aways. We think it is because he actually enjoys being on stage.

More About Speaker, Alf Rehn . . .
Born in Finland, but raised in more than a dozen places, Alf Rehn stopped long enough to get a MSc in business studies, and later – even more improbably – got a doctorate in technology (Industrial Management) while reading and writing about anthropology and behavioral sciences. His thesis on gift economies and new organizational forms discussed piracy and collaboration long before it became fashionable, and got him enthusiastic about looking for the bleeding edge of economic developments. Despite this, he got a chair in management the aforementioned ridiculously early age. His “grown-up” research has focused on moralization, ideology and critique, as well as things such as haute cuisine, innovation, accidents, popular culture, cannibalism, creativity, philosophy, boredom, entrepreneurship, rap lyrics, project management and luxury. Surprisingly enough, this research has been published in top international journals and prestigious books. Even more surprisingly, he’s still curious about the world.

He currently lives in both Finland and Denmark, as well as in a range of hotel rooms and airport lounges around the world. He drinks too much coffee, not enough water, and is a devoted fan of Ethel Merman and the divine Patsy Cline. 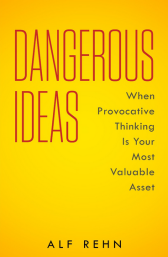