Bill Kurtis’s Key Accomplishments Include . . .
An acclaimed documentary host and producer, network news anchor, multimedia production company president, and well-known commercial spokesman, Bill Kurtis is celebrating his 40th anniversary in the field of broadcasting. Over the years, Bill Kurtis has created a body of work that is virtually unparalleled.

Bill Kurtis is also an author. The Death Penalty on Trial: Crisis in American Justice is his most recent book, which explores issues surrounding capital punishment in America.

Bill Kurtis began his television career in Kansas in 1966. After being recognized for his 24-hour coverage of a devastating tornado, Kurtis was hired by WBBM-TV in Chicago where he was a field reporter and later anchor. Bill Kurtis then moved on to the network level at CBS where he anchored the CBS Morning News and contributed to CBS Reports. During his career as a network newsman, Bill Kurtis covered such notable stories as the Richard Speck murders and the Charles Manson trial. He is also credited with breaking the Agent Orange story and the story of Amerasian children in Vietnam.

Returning to Chicago as news anchor in 1985, Bill Kurtis began his career as a documentarian, traveling to the far ends of the earth for the Peabody Award-winning series The New Explorers, which aired on A&E. In 1990, he began producing programs for the A&E Network, including the long-running, award-winning Investigative Reports and Cold Case Files (nominated for 2004 and 2005 Primetime Emmys) as well as Investigating History for The History Channel. Bill Kurtis has also served as the host of A&E’s American Justice – the longest running non-fiction justice series on cable.

Bill Kurtis graduated from The University of Kansas with a Bachelor of Science degree in Journalism. He attended Washburn University School of Law where he was awarded a Juris Doctor degree.

More About Bill Kurtis . . .
In his home state of Kansas, Bill Kurtis is a rancher, radio station owner, art gallery owner, small businessman, supporter of small-town America, and an active conservationist. His 10,000-acre Red Buffalo Ranch is a working cattle ranch, raising and marketing organic grass-fed beef. The ranch is located in the last section of North America to enjoy untouched tall grass prairie, a personal point of pride for Mr. Kurtis.

Bill Kurtis is the recipient of numerous humanitarian, journalism, and broadcasting awards including Emmys, CableACE Awards, and the Thurgood Marshall Award for his Investigative Reports installment on the death penalty. He is a published author and a member of the board of directors of several distinguished organizations including: The Nature Conservancy, the National Park Foundation, and the Field Museum of Chicago. 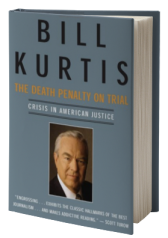