Surprisingly, not having had the opportunity to see the ocean or to fly in a jet until the age of 17, Brick’s path from his humble terrestrial prison in upstate New York, ultimately led to a career that spanned twenty seven years of non-stop sea and air work, all from the vantage point of an F/A-18 Hornet cockpit. The catalyst was a deep passion for the original American sport of lacrosse and a strong to desire to serve. The US Naval Academy was fortunately willing to partner in both areas and became his alma mater in 1982.

In a Career that was 99% pure exhilarating fun balanced by 1% of pure terror the lessons of leadership, survival, faith, love, perseverance, and camaraderie were plentiful, direct, and changed his life. As a Navy Strike Fighter, Brick amassed over 4500 hours and nearly 1000 arrested carrier landings during multiple combat deployments. His tours of duty include F/A-18 Hornet Squadron Command and he also provided leadership and instruction to two of the Navy’s elite air power training organizations – the Naval Strike and Air Warfare Center and to Naval Strike Force Training Pacific. In the blink of an eye it was over as he bid farewell to his beloved Navy at his final Command, Naval Base Ventura County.

Driven to enhance his business acumen, Brick embarked on a second career as an executive with Booz Allen Hamilton Inc. and then with Northrop Grumman Aerospace where he returned to his aviation roots as he supported both US and international tactical aircraft sales and provided design strategies for the aircraft of the future. Capitalizing on those rewarding professional experiences and powered by a brand-new MBA, Brick began partnering with other companies as a professional trajectory enhancer, otherwise known as a business and leadership consultant. From Finance to Transportation, the lessons and experience from his unique past continues to be useful to others.

But if given the choice, his go to move is to coach and mentor young men and women either professionally or through his first passion – Lacrosse. And when it comes to Joy and fulfillment there is no greater force in his life than the support from, and pride in, his devoted family –  his wife Terrie and their four children Sarah, Rachel, Anna, and Bradford.

“I love the way Brick Conners engages you with stimulating stories from his fighter pilot career, and then drops a bomb on parenting myths.”

“His real life stories lay bare simple truths and realities about character, leadership, and service to others that are not only fascinating but will motivate you to action.” 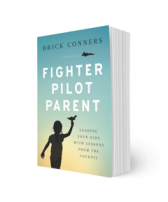