Captain Charlie Plumb is a top motivational speaker, Navy Fighter Pilot, author, and Vietnam War POW. During his nearly six years of captivity, Captain Charlie Plumb distinguished himself among his fellow prisoners as a professional in underground communications, and served for two of those years as the Chaplain in his camp. Since his return home, more than 4,000 audiences in nearly every industry have been spellbound as Captain Plumb draws parallels between his P.O.W. experience and the challenges of everyday life.

The Power of Choice: In a daily routine or in a communist prison camp, each of us has the choice to succeed, to fail or to become the victim of circumstance.

Adversity: Viewed as opportunity and challenge, adversity encourages growth, and propels us beyond self-imposed limits. In his words, "Adversity is a horrible thing...to waste."

Teamwork: In a world where downsizing forces us to do more with less, we must empower the team. "Packing parachutes" can mean the difference in survival. Yours, and your teams!

Change: Invariably, just about the time things feel comfortable, change hits. And whether that change is positive or negative it can be disturbing and difficult to adjust to. Yet, it's during those times that ones true value shows up, in taking the risks necessary to adapt to change.

Empowerment: Each of us has assets we often times don't tap into until we're challenged. Whether or not we realize it, we each have the inner strength and resources to meet whatever business or personal challenges come our way.

Captain Charlie Plumb graduated from the Naval Academy at Annapolis and went on to fly the F-4 Phantom jet on 74 successful combat missions over North Vietnam. On his 75th mission, with only five days before he was to return home, Captain Plumb was shot down, captured, tortured, and imprisoned in an 8 foot x 8 foot cell. Charlie Plumb spent the next 2,103 days as a Prisoner Of War in communist prison camps.

During his nearly six years of captivity, Captain Charlie Plumb distinguished himself among his fellow prisoners as a professional in underground communications, and served for two of those years as the Chaplain in his camp. Since his return home, more than 4,000 audiences in nearly every industry have been spellbound as Captain Plumb draws parallels between his P.O.W. experience and the challenges of everyday life. He has shared his message to an even wider public through appearances on Good Morning America, Nightline, Larry King Live, and The NewsHour with Jim Lehrer.

Captain Plumb is also the author of I’m No Hero and The Last Domino. He is an expert advisor to the U.S. Navy, governmental organizations and news media.

In an upbeat, humorous, and dynamic style, Captain Charlie Plumb draws upon his experience to demonstrate how to turn adversities, the hard times each one of us faces, into assets in today’s market place and in daily living. Captain Plumb shares his insights on coping with the challenges of both every day life and business competition in the twenty-first century. He helps audiences break free of their own self-constructed prisons of doubt. Charlie Plumb helps people uncover a new sense of purpose and potential. He gives each participant the strength to rise above the daily challenges of work and home and to recognize the opportunities that surround them. Captain Plumb leaves his listeners wanting to achieve and excel, no matter what the obstacles. In a powerful look-to-the-future manner, Captain Charlie Plumb illustrates the importance of living life to the fullest and of overcoming everyday adversity.

More About Captain Charlie Plumb . . .
One of the most sought-after achievement speakers of his time, Charlie Plumb’s presentations are as he is – sincere, straightforward, humorous and tailored to motivate each specific audience he encounters. Captain Plumb’s insights on how to cope with the difficulties as well as the opportunities in life, have a positive impact on those who hear his message, those who read his books, and those who come to know him as a friend.

To this day, Captain Plumb continues to fly left-seat at every opportunity. He has personally owned 8 airplanes, the most treasured being a World War II PT-19 Open-Cockpit Antique. Over the course of his military aviation career, Charlie Plumb has flown the T-34 Mentor, T-2 Buckeye, F-9 Cougar, F-11 Tiger, F-4 Phantom, A-4 Sky Hawk, A-7 Corsair, FA-18 Hornet and F-16 Falcon. He currently owns a Rutan-designed experimental single-engine Long-Eze.

Captain Charlie Plumb’s military honors include two Purple Hearts, the Legion of Merit, the Silver Star, the Bronze Star and the P.O.W. Medal.

“Our event went great and a big part was due to the fabulous job Captain Charles Plumb did. It was such a pleasure to have him at the event and the response has been just overwhelming. I can’t wait to hear Captain Plumb speak again. He was exceptional to work with and such a pleasure to meet. Thanks for all of your help, BigSpeak.”

“From the preparation to the audience reaction, your grade was excellent. You gave us many messages and words of inspiration. In each one of us there are the elements for success if we choose to use them. Our adversity in our daily lives becomes miniscule in comparison to your experiences in North Vietnam. Your positive spirit in meeting your challenges can be an example for us.”

“A superb personal testimonial on overcoming adversity and keeping on keeping on! Thank you Charlie, for sharing and allowing me to ‘push the wire back’. I will use Charlie’s talk to help me be a better servant to God, my wife, my children, my clients and my firm.” 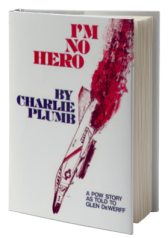 Gerald Coffee Inspirational Speaker, Celebrated Naval Officer and Former Prisoner of War
W. Mitchell Motivational Speaker and Author of It's Not What Happens To You - It's What You Do About It
Dick Rutan Voyager Pilot, Adventurer and Aviation Pioneer
Admiral Ray Smith Former Navy Seal, Leadership and Peak Performance Expert, Training Specialist
Close