This program is deeply substantive, highly interactive and entertaining. As the talk unfolds Your audience will discover: The three habits we can all use to influence others Why most of us overuse one habit, much to our detriment Ways to ...

This program is deeply substantive, highly interactive and entertaining. As the talk unfolds

Your audience will discover:

This program is based on Connie’s bestseller, Talk Less, Say More

Leading in the Spotlight

In this program, Connie shares what every senior executive must know to thrive as a high-profile leader. Senior leaders will discover how to: Earn and sustain trust in a world that craves authenticity, yet demands perfection Influence multiple ...

In this program, Connie shares what every senior executive must know to thrive as a high-profile leader.

Senior leaders will discover how to:

This program is based on Connie’s bestseller, Become the Real Deal

This groundbreaking program is a master class on how to influence audiences with integrity, so they willingly take action. Your audience will discover: Identify your ideal outcome Pinpoint how your audience makes decisions that align with your ...

This groundbreaking program is a master class on how to influence audiences with integrity, so they willingly take action.

Your audience will discover:

Connie Dieken is the founder of The Dieken Group—an executive coaching and consulting firm that advises CEOs and other senior leaders in the spotlight. Connie helps these leaders deliver influential messages in high-pressure situations.

Her clients are leaders in some the world’s best-known organizations including Apple, HP, Nestlé, and The Cleveland Clinic.

Connie developed her unique skills during her twenty years as a TV journalist for ABC and NBC. She received five Emmy Awards®, two Telly Awards®, and was inducted into the Radio/Television Broadcasters Hall of Fame.®

While anchoring news programs, Connie would interview people of power, including President Bill Clinton and Jack Welch. As a result, she became fascinated with how leaders influence and gain commitment. This fascination prompted her to leave broadcasting and launch her own company in 2000.

Although Connie already had years of qualitative data on how people influence, she also wanted data that was quantitative. When she launched her firm, she began an ongoing research study with over 20,000 respondents that became the statistically valid assessment tool, Influence 360°. Influence 360° measures an individual’s personal influence patterns, and guides them on how to become leaders capable of influencing in any situation, regardless of the conditions.

Using the influence research as a foundation, she created training programs that are taught worldwide in corporate universities including The Influence Lab® and Present to Win®.

Connie has been interviewed about her work for numerous media outlets, including CEO.com, CNBC, Crain’s Business, Investor’s Business Daily, the Chicago Tribune, the Los Angeles Times, The Wall Street Journal, and USA Today.

Connie is also a renowned keynote speaker and in 2017 the National Speakers Association inducte her into the Speaker’s Hall of Fame. She’s delivered speeches on four continents to audiences in the thousands. She talks about how to develop leadership presence and lasting influence. Her speaking clients include Berkshire Hathaway, Citibank, Dow Corning, Dr. Pepper, eBay, Ingram, Johnson & Johnson, McDonald’s, Old Dominion, The Home Depot, and Unicentro.

Along with her keynote speeches for corporations, Connie is a guest lecturer for executive education and MBA programs in business schools such as Case Western University, Clemson University, Indiana University, and The Ohio State University.

“Connie Dieken’s three-step strategy is a smart, practical guide for business leaders and others who want to create a high-performance culture.”

“Talk Less, Say More has become an integral part of our sales training program. In today’s manufacturing environment, our sales engineers must be able to quickly gain mind share of our customers, deliver the appropriate messages, and win new business.”

“Perfect. Exactly what we needed to be more on point, improve our presentation skills and win sales. I would highly recommend onPoint Communication for anyone interested in improving their business speaking or presentation skills. Connie is amazing in her personal approach and individually tailored each presentation to my specific industry.” “Saying” 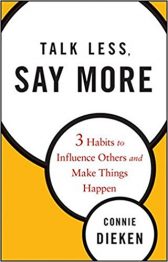 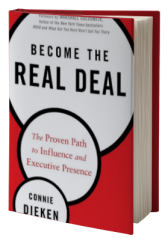