The Road to an Authentic Life

About Keynote Speaker Courtney B. Vance

Courtney B. Vance’s Key Accomplishments Include . . .
From Harvard to Hollywood, Courtney B. Vance has graced both stage and screen with astounding talent. This, combined with his extreme passion makes Mr. Vance a force to be reckoned with. Most recently, Courtney Vance and wife Angela Bassett completed their first book, Friends: A Love Story which chronicles their story of healthy relationships, love and family.

Courtney Vance may be best known for his five-year run on NBC’s drama “Law & Order: Criminal Intent” and was nominated for the NAACP Image Award for his role as New York Assistant D.A. Ron Carver.

Courtney B. Vance’s numerous film roles include: The Hunt for Red October, Cookie’s Fortune, The Tuskegee Airmen, Hamburger Hill, Love and Action in Chicago and The Piano Lesson.

More About Courtney Vance . . .
Courtney B. Vance was born in Detroit, Michigan and graduated from Harvard with a Bachelor of Arts degree and received a Master of Fine Arts degree from Yale School of Drama. After moving to New York, Courtney Vance quickly established himself on the theatrical scene with numerous performances and two Tony Award nominations. The first, for his mesmerizing performance in August Wilson’s Pulitzer Prize-winning play Fences, which earned him not only a Tony nomination, but the Theater World Award and the Clarence Derwent Award. Mr. Vance’s second Tony nomination was for John Guare’s Six Degrees of Separation.

Courtney Vance currently resides in Southern California with his wife, actress Angela Bassett and their twins. 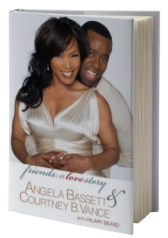