David Copperfield has received over 20 Emmy awards for his groundbreaking television specials, and year after year, he continues to tour sold-out arenas throughout the world. He was knighted by the French government and – along with Steven Speilberg, Martin Scorsese and Colin Powell – received the Living Legend award from the United States Library of Congress. He holds 11 Guinness World Records and has sold more tickets than any other solo entertainer in history, with ticket sales in the billions – more than Frank Sinatra, Michael Jackson or Elvis.

A shy kid who overcame his insecurity with the help of magic, David was already an accomplished conjurer by the age of 12, when he was the invited to join the Society of American Magicians – its youngest member ever. At 16, Copperfield was an adjunct professor at New York University, where he taught a course called “The Art of Magic.” At 18 David was cast as the lead in The Magic Man, a musical comedy created by the producers of Grease. The show opened in Chicago to rave reviews. It went on to become the longest running musical in Chicago’s history, and gave him the invaluable experience of performing daily in front of a live audience, allowing him to develop the spontaneity and love of live performance that has him performing up to four shows a day, and doing over 500 performances every year.

For decades David Copperfield continued to break new ground with his annual top-rated, Emmy Award winning television specials, on which he continued to outdo himself by “Walking Through the Great Wall of China,” escaping from chains and shackles just before he was plunged over Niagara Falls, surviving being locked in a safe inside an imploding building, making a daring “Escape from Alcatraz” prison, and “Vanishing a 45 ton Orient Express Train Car” while surrounded by a ring of spectators. In his fifth television special, he presented “The Illusion of the Century: The Disappearance of the Statue of Liberty” in front of a live audience on Liberty Island, and to millions of astonished television viewers.

He has forever changed the future of his art and shown that there are no limits; David Copperfield’s magic is as vast as the imagination.

More About Speaker, David Copperfield . . .
A historian of his art, David Copperfield founded The International Museum and Library of the Conjuring Arts, which houses the world’s largest collection of historically significant magic memorabilia, posters, books, props and artifacts. The museum comprises of approximately 80,000 items of magic history, including Houdini’s Water Torture Cell and his Metamorphosis Trunk, Orson Welles’ Buzz Saw Illusion and automata created by Robert-Houdin, who is considered the father of modern magic. The museum also includes the only known recording of Houdini’s voice – preserved on the original Edison wax cylinders.

David’s proudest achievement is Project Magic, a program that uses magic as therapy in a thousand hospitals in 30 countries worldwide. This medically-certified program motivates patients to regain their dexterity, coordination and cognitive skills by learning simple magic and sleight of hand.

“Copperfield’s spectacular illusion and artistry will leave you gaping in unabashed amazement.”

“Our era’s giant of magic.” 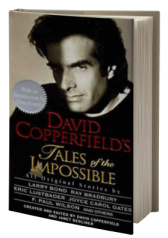