Univ. of Michigan Business Professor and Leading Authority on HR

Organizational Capability as a Competitive Advantage

Dave Ulrich is the Rensis Likert Professor at the Ross School of Business, University of Michigan, and a partner at the RBL Group ( http://www.rbl.net ) a consulting firm focused on helping organizations and leaders deliver value. He has published over 200 articles and book chapters and over 30 books. He edited Human Resource Management 1990-1999, served on the editorial board of 4 Journal and on the Board of Directors for Herman Miller (16 years), has spoken to large audiences in 90 countries; performed workshops for over half of the Fortune 200; coached successful business leaders, and is a Distinguished Fellow in the National Academy of Human Resources. He is known for continually learning, turning complex ideas into simple solutions, and creating real value for those he works with in three fields.

Human Resources. He and his colleagues have shaped the HR profession and he has been called the “father of modern HR” and “HR thought leader of the decade” by focusing on HR outcomes, governance, competencies, and practices (HR Champions; HR Value Added; HR Transformation; HR Competencies; HR Outside In). He spearheaded a “gift” book on the future of HR (The Rise of HR) distributed to over 1,500,000 HR professionals), in which 70 thought leaders freely shared their insights.

Honors include:
2021: *Lifetime Achievement Award from Institute of Management Studies
2020: *Distinguished Fellow (one of 15), National Academy of Human Resources
*Michael R. Losey Excellence in Human Resource Research Award by SHRM
*Honorary Doctorate from Utah Valley University
*Initiated the Dave Ulrich Impact Award by the Academy of Management to honor contribution in HR
*”Most Influential Global HR Leader, 2020” sponsored by PeopleFirst and HRD Forum
2019: *Named one of the 100 top influencers in HR (in leadership &amp; development category)
*Named one of the top 20 influential HR leaders
*Ranked #1 thought leader in HR by HRD Connect
2018: Named one of the 20 most influential business professors in the world by top-business-degree (#13)
2017: *Named to the Thinkers50 “Hall of Fame”, a recognition of lifetime achievement in influencing management
*Chartered Fellow of the Human Resources Institute of New Zealand
2016: Presidential lecture “in defense of organization” for Utah Valley University
2015: *Named the most “influential HR thinker of the decade”
*Listed in Thinkers50 as management thought leader
2014: *Ranked #1 speaker in Management/Business by Speaking.com
*Commencement speaker, University of Michigan Ross School of Business
2013: *Lifetime Leadership Award from the Leadership Forum at Silver Bay
*Listed in Thinkers50 as a management thought leader
2012: Lifetime Achievement Award from HR Magazine for being the “father of modern human resources”
2011: *Ranked #1 most influential international thought leader in HR by HR Magazine

Dave and Wendy live in Alpine, Utah, have 3 children and 10 grandchildren. 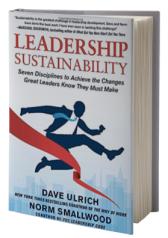