Dean Ornish, MD, is a top healthcare speaker and clinical professor of medicine at the University of California, San Francisco. Dr. Ornish is also the founder and president of the non-profit Preventive Medicine Research Institute. Dean Ornish received his medical training in internal medicine from the Baylor College of Medicine, Harvard Medical School, and the Massachusetts General Hospital.

Stress, Diet and Your Heart

The research that Dean Ornish and his colleagues conducted, has been published in: The Journal of the American Medical Association, The Lancet, Proceedings of the National Academy of Sciences,Circulation, The New England Journal of Medicine, and the American Journal of Cardiology. A one-hour documentary of their work was broadcast on NOVA, the PBS science series, and was featured on Bill Moyers’ PBS series, Healing & The Mind. The group’s work has also been featured in all major media, including cover stories in Newsweek, Time, and U.S. News & World Report.

More About Dean Ornish . . .
Dean Ornish, MD is a member of the boards of directors of the U.S. United Nations High Commission on Refugees and the San Francisco Food Bank and the advisory board of The Quincy Jones “Project Q” at the Harvard School of Public Health. Dr. Ornish was appointed to the White House Commission on Complementary and Alternative Medicine Policy and elected to the California Academy of Medicine. In addition, Dr. Dean Ornish is chair of the PepsiCo Blue Ribbon Advisory Board and the Safeway Advisory Council on Health and Nutrition. Dr. Ornish consults with the CEO of Mars to make healthier foods and to provide health education to their customers in this country and worldwide.

Dean Ornish has received several awards, including: the “Outstanding Young Alumnus” Award from the University of Texas, Austin, the University of California, Berkeley, “National Public Health Hero” award, the Jan J. Kellermann Memorial Award for “distinguished contribution in the field of cardiovascular disease prevention” from the International Academy of Cardiology, a Presidential Citation from the American Psychological Association, the Beckmann Medal from the German Society for Prevention and Rehabilitation of Cardiovascular Diseases, the “Pioneer in Integrative Medicine” award from California Pacific Medical Center, the “Excellence in Integrative Medicine” award from the Heal Breast Cancer Foundation, the “Golden Plate” Award from the American Academy of Achievement, a U.S. Army Surgeon General Medal, and the Bravewell Collaborative Pioneer of Integrative Medicine award.

Dr. Dean Ornish was a physician consultant to President Clinton (1993-2000) and to several bipartisan members of the U.S. Congress and consulted with the chefs at The White House, Camp David, and Air Force One to cook more healthfully. Dr. Ornish is listed in Who’s Who in Healthcare and Medicine, Who’s Who in America, and Who’s Who in the World.

Dr. Ornish was recognized as “one of the most interesting people of 1996” by People magazine, selected as one of the “TIME 100″ in integrative medicine, and chosen by LIFE magazine as “one of the fifty most influential members of his generation.” 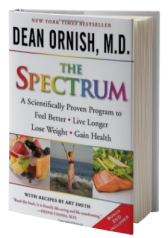