The Media in the Cross Hairs: Journalism in a Time of "Fake News"

Choose Your Battles - Tales from the Working Mother Front

Entrepreneur of Your Life

Deborah Norville is the longest-serving anchor on American television. Ratings jumped 15% the week Norville joined Inside Edition and have remained high ever since. Throughout her tenure, it has consistently ranked in the top ten television magazine shows in America. The veteran journalist joined Inside Edition, after her tenure at CBS News where she was anchor and correspondent.

Inducted into the Broadcasting and Cable Hall of Fame, Norville’s thought leadership extends to her membership in several organizations and boards. Norville is a member of the Board of Directors for the Viacom Corporation and serves on the Compensation Committee. She is also a member of the Council on Foreign Relations, Women’s Forum of New York, and Women Corporate Directors. Norville serves as a Director for the Broadcasters Foundation of America. She is a past board member of the Girl Scout Council of Greater New York, Rita Hayworth (Alzheimer’s) Steering Committee. She is also on the boards of two privately held family firms.

A lifelong crafter, Norville credits the confidence needed for her career to her love of crafting. She made much of her wardrobe early in her career and today enjoys sewing for her home. She has been the face of her own line of yarn and needles and is often knitting or crocheting off camera on the television set.

“My mother used to say that the world would be a much better place if people would say ‘thank you’ more often. Drawing on uplifting stories of people from all walks of life, Deborah Norville shows that an attitude of gratitude not only makes for a nicer world, it also makes you a happier person.”

Co-Author, The One Minute Manager and Lead Like Jesus

Deborah Norville has proven that resilience is a big part of success. Success is power—and Thank You Power is aptitude and attitude at their most efficient, and therefore most effective. Deborah has done a wonderful job with a subject that is important for all of us.” 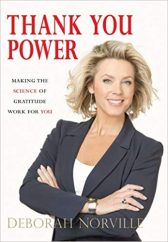 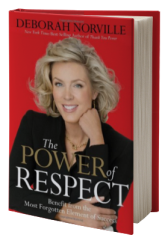