How to Build a Creative Team The Need for Creativity in Business.

The Logic of Creativity.

The Five Stages of Thinking.

Developing the Skills of Thinking.

How Creativity can Enhance Quality, Re-engineering and Other Change Initiatives.

Edward de Bono’s Key Accomplishments Include . . .Dr. Edward de Bono is widely regarded as the world’s leading authority in the field of creative and conceptual thinking, and the direct teaching of thinking as a skill. He has authored 60 books on the topic of thinking, which have been translated into 35 languages. Dr. de Bono’s sessions, invariably sellouts, are sought after by business, government and education globally.

Edward de Bono was born in Malta and graduated from the University of Malta. He attended Oxford as a Rhodes Scholar, where he earned his MD, and two PhD’s. Dr. de Bono has held faculty appointments at the universities of Oxford, Cambridge, London and Harvard.

Edward de Bono is the originator of the term “Lateral Thinking” which has an official entry in the Oxford English Dictionary, and is the creator of the extremely popular “Six Thinking Hats” concept.

Dr. de Bono has made two TV series: “de Bono’s Thinking Course” for the BBC, and “The Greatest Thinkers” for WDR, Germany.

More About Edward de Bono . . .
Peter Ueberroth, who organized the 1984 Olympic Games in Los Angeles (and for the first time ever, turned a profit), attributed his success to the use of Edward de Bono’s Lateral Thinking tools. So did John Bertrand, skipper of the successful challenge for the America’s Cup. Ron Barbaro, past president of Prudential Insurance also attributed his invention of the “living needs benefits” package, which revolutionized the insurance industry, to the power of the de Bono tools.

Recent achievements include: The International Astronomical Union named a planet after Dr. de Bono in recognition of his contribution to humanity; a group of South African University professors compiled a list including Dr. de Bono as one of the 250 most influential people in the history of humanity; an International Thinking Conference at MIT recognized Dr. de Bono as a pioneer in the field of “teaching thinking”. There are over 4 million references to Edward de Bono’s work on the internet.

“You can do no better than to attend a de Bono seminar.”

“What Dr. de Bono is doing to teach people to think, may be the most important thing happening today.”

“We were really inspired by de Bono’s Six Hats process at work and were very impressed when we saw the results. It has changed the way we think at Royal Trust.” 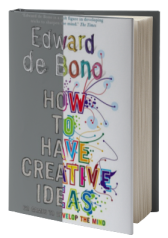